On the outskirts of a rural village in Sierra Leone lies a small cave, easy to miss, unless you knew where to look. Packed inside are swarms of tiny, bug-eating free-tailed bats. The locals know the bats follow the creek for food and water as they shoot out at sunset, filling the air with a leathery fusillade.

Stretching a net across their flight path downstream, a team of novel virus hunters was able to snag a few, adding them to bats caught in and around nearby homes and villages. The researchers took oral, fecal, blood, and urine samples — thousands of them — and packed them off to California in massive, human-sized coolers.

The team was part of the PREDICT project, an initiative of the United States Agency for International Development (USAID). Their mission was simple: find new potential zoonotic diseases. That’s the scientific term for diseases that jump from animals to humans — like the novel coronavirus causing the COVID-19 pandemic.

When the giant coolers were finally cracked open at the University of California, Davis, dry ice fog poured eerily from the lifted lids, and the team began testing the bat samples for filoviruses — like Ebola.

They had one hit. Then more.

“We saw that, and we were like ‘oh my God,’” says Tracey Goldstein, associate director of the One Health Institute (OHI) at UC Davis and a co-principal investigator for PREDICT.

Genetic sequencing revealed that the bat virus was not Ebola Zaire, the most famous strain. It was, however, an Ebola virus — a new one.

“We actually couldn’t believe that we found potentially something new,” Goldstein says.

Even more concerning, the samples had come from bats in and near people’s homes — not the caves. Ebola had been curled up in the corners this whole time — a tiny, flying mamba.

The new virus, officially announced in August 2018, was dubbed Bombali ebolavirus. It has shown the ability to infect human cells in the lab.

It was the first time an Ebola virus had been found before it could infect humans.

The discovery of Bombali ebolavirus illustrates what a cadre of public health experts are calling the “One Health” approach to preventing zoonotic diseases.

It’s a simple idea: that animal to human jump does not just happen. It requires close and continuing contact between animal carriers and potential human hosts. Therefore, catching animal-borne diseases requires understanding the health of the whole population, both human and animal.

This means studying not just the viruses but also the animals, their environment, and the humans who interact with them.

“It’s really a value to look at … what’s happening in other species to guide protective measures for our own health,” says Catherine Machalaba, a policy advisor at EcoHealth Alliance, an environmental health nonprofit.

The eponymous One Health Institute at UC Davis and their Sierra Leonean partners at the University of Makeni caught Bombali ebolavirus before there was any known human infection.

Headed by executive director Jonna Mazet, OHI researchers are applying the One Health approach to discovering new zoonotic diseases (PREDICT has found over 100 new coronaviruses alone), assessing their risk, and attempting to stop spillovers — perhaps preventing the chain reaction that can kick off another pandemic.

“There are multiple factors that interact to cause this perfect storm of conditions,” Mazet says. “We need to understand the circumstances that allow the spillover, and then also allow it to suddenly take off.”

One of the key pieces to that puzzle: the environment.

Along the eastern coast of Australia lurks hendra virus. Although human spillovers are rare — only seven confirmed cases so far — it is one of the deadliest zoonotic diseases: four of those seven died.

The virus lives in bats known as flying foxes, and, according to researchers Raina Plowright and Peter Hudson, steady loss of winter habitat and food is pushing the bats further into settled areas and into contact with horses. The horses then become infected from exposure to the bat’s urine. Then humans catch the virus from exposure to the horses” bodily fluids and excretions.

Arresting animal to human diseases requires more than just warnings; it requires knowledge and capability on the ground where diseases are circulating.

Australia demonstrates how climate change and more acute human factors, like urban sprawl and agriculture, can alter an animal’s behavior.

Eliminate habitat and food sources? Those animals may move into contact with people, bringing zoonotic diseases with them.

Studying the environment, in combination with zoological and social data, can also give us clues of where to focus our efforts. Places with more biodiversity have more virus diversity, Mazet says. Combine that with land use change and lots of people?

“That’s where you see ecosystems being stressed,” Mazet says, and the risk of animal to human diseases rises. Understanding the ecosystem is key to understanding the animals that live within it — and their viruses.

Marburg virus is a brutal viral hemorrhagic fever, in the same family as Ebola, carried by the  Egyptian rousette bat. Marburg has been mostly seen (so far) in Central and East Africa.

But Tracey Goldstein’s PREDICT team found Marburg in rousette bats in Sierra Leone — thousands of miles from where it had ever been seen before. The spring before, another team found the Bombali ebolavirus in Kenya, across the continent from where it was discovered.

The discoveries showed that it’s the animal, as much as the virus itself, that’s important for understanding where, when, and how an outbreak can occur, Goldstein says.

“It’s the host, not necessarily the virus.”

Some virus hosts are a reservoir — the animal that keeps the virus circulating in the wild. These are the cauldrons viruses bubble in before beginning their jumps into one species and then another. (Think flying foxes to horses to Australians.)

For example, bat colonies under resource pressure respond by producing more babies, and when they breed, they are more infectious, Mazet says.

All of this impacts the risk for animal to human diseases.

Just knowing an animal is a disease reservoir is only part of trying to predict, and stop, zoonotic diseases. You must also understand its behaviors, interactions, when it is shedding virus, how all that is impacted by its environment, and how those impacts may bring it into contact with human beings.

After all, we’re neighbors.

After the initial shock of discovering a new Ebola virus, Goldstein’s thoughts leapt to the next step. These bats were in people’s houses. What do we tell them? How do we tell the government, the communities?

Humans have multiple roles in the One Health approach. Some, like climate change, are global in scale. Others, like how agriculture and development may impact a reservoir’s habitat, can be studied regionally. And on a practical, individual level, researchers need to understand how people view and interact with local animal populations.

All this needs to be combined with animal, ecological, and viral research to bring the picture into focus. If the One Health Institute can predict where a given bat population is likely to carry a zoonotic disease (say, from Sierra Leone to Kenya), how those bats’ behaviors may change based on their environment, and see where human beings may intersect with them, they could perhaps head off a spillover event.

But arresting animal to human diseases requires more than just warnings; it requires knowledge and capability on the ground where diseases are circulating.

It’s a simple idea: that animal to human jump does not just happen.

Having strong labs across the world can take emerging virus research which would have taken months down to days.

By working with local partners and building up academic curriculum and training, the One Health Institute attempts to build and bolster that global immune system.

The people who are most at risk of contracting zoonotic diseases — potential Patient Zeros — need clear best practices to prevent spillovers. This is why working with locals who understand their communities is important.

The One Health approach also informs techniques for managing animal diseases. Simply going out and killing bats, for example, not only hurts the ecosystem — some bats keep down the mosquito population, for example — but is not going to help stop bat-borne diseases; in fact, it may do the opposite.

Hunting the bats down — in addition to exposing the hunters to bodily fluid and fangs — disrupts their population. And what do distressed bats do? They mate.

“And we know that that incredibly dangerous time for transmitting virus has to do a lot with the reproductive cycle,” Mazet says.

Moreover, stress can directly increase the amount of virus that the bats are shedding, according to Peter Hudson, a professor of biology at Penn State who studied the transmission of hendra virus in Eastern Australia.

“I can’t tell you how important it is to understand the mechanisms, to drill down into what’s actually taking place,” Hudson says. “Because once you understand it, you then find solutions to it.”

Finding those solutions is one thing, implementing them is another.

There is one final way people come into play when it comes to One Health. They must be able to muster the courage and drive to invest in something that, if it works right, will return benefits that are invisible.

The COVID-19 pandemic is the most dramatic example in over 100 years of what can happen when a virus takes humanity by surprise. If we wait until after a spillover to respond, we will always be on the back foot; always at the mercy of whatever zoonotic diseases may leap, like a predator, from the wild. Proponents of the One Health approach believe their method is the best way to prevent the next COVID-19.

But One Health methods are not cheap, and that can be a hard sell. “It’s that invisible value of prevention,” Machalaba says — the epidemics that don’t happen.

I can’t tell you how important it is to understand the mechanisms, to drill down into what’s actually taking place. Because once you understand it, you then find solutions to it.

Some detractors see projects like PREDICT’s virus hunting as mere viral “stamp collecting” and a wasteful use of scarce resources. (It’s not just a catalogue, Mazet counters: it’s a risk assessment tool, too.)

Because running a global NSA for virus surveillance is prohibitively expensive, OHI wants to leverage their research for scientists and governments around the world. OHI’s EpiCenter for Disease Dynamics creates models and analytical tools created to help tell researchers where to look for emerging disease threats.

The EpiCenter can produce tools which estimate animals and areas of risk, as well as how human and ecological developments change that risk.

“Just trying to piece this really complex puzzle together is something the EpiCenter’s been doing,” says Christine Kreuder Johnson, EpiCenter’s director.

Through a combination of modeling, community outreach, and boots-on-the-ground, blood and sweat and wings and fangs and sweat-slicked, goggle-fogged work of sampling, the One Health community believes that the next pandemic can be stopped. And the human price of the next virus may be far higher than today’s.

“We can do this,” Mazet says. “We can find the viruses. We can strengthen the system. We can create all the contingency plans. But you have to have the political will.” 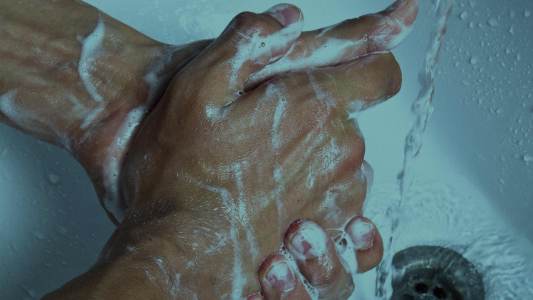 With a lack of access to running water and other resources, the Navajo Nation faces a tough challenge in COVID-19. But the Diné are fighting back.