In June 2022, South Korean tech giant Naver Corporation opened a new office building — and a fleet of robots are now navigating its halls alongside the human employees. The building is a sandbox for trying out the tech that’s being developed there, as well as teaching robots how to work around humans.

Naver operates South Korea’s most popular search engine, earning it the nickname of the “Korean Google,” but “Korean Alphabet” might be more apt (though, admittedly, a bit more confusing).

Like Google’s parent company, Alphabet, Naver is involved in seemingly everything tech-related, including AI, robotics, healthcare, self-driving cars, and the metaverse, and many of the conglomerate’s most futuristic projects are spearheaded by its R&D subsidiary, Naver Labs.

In 2016, Naver announced plans to construct a new headquarters in Bundang, South Korea, but rather than building a typical high-rise, it decided to make the entire facility, dubbed “1784,” into a testbed for Naver Labs’ tech, creating what it calls the “world’s first robot-friendly building.”

“At 1784, we’ll be experiencing and testing the future technologies we’re developing before presenting them to the world,” SangChul Kang, head of Naver Labs’ Project and Platform Group, said in April 2022.

The most obvious tech testing going on at 1784 involves Naver Lab’s self-driving service robot, Rookie, which is about 3 feet tall and looks a bit like a water dispenser, minus the jug. At 1784, dozens of these bots fill the role of “gofer,” ferrying things around the building.

An employee can place an online order at the in-house Starbucks, for example, and the barista will load the drink into a Rookie’s storage compartment. The bot will then drive itself to the thirsty worker’s location and use facial recognition tech to identify who it’s supposed to give it to.

Naver Labs also gave the robots animated “eyes” to help workers anticipate their movements and designed them to be as unobtrusive as possible while navigating the building.

“Socioculturally speaking, we made our robots have manners,” said a member of Naver Labs’ human-robot interaction team. “We all have our personal space and feel discomfort when other people come too close. Our robots were designed to successfully avoid people in a way that does not invade this personal space.”

For Naver, ensuring Rookies could go everywhere they needed to on a single floor in 1784 wasn’t a problem — by adhering to standards for wheelchair accessibility, the company didn’t need to worry about the bot being blocked by narrow hallways or individual steps.

1784 has 36 floors, though, so Naver designed the robot to be able to use elevators alongside employees. It even worked out that the best place for the robot to “stand” was in the front corner opposite the floor buttons — elevator riders got uncomfortable when the bot stood behind them.

To ensure the robot could continue operating at times when elevators were crowded, such as around lunch hour, Naver even built a robot-only elevator system called the “Roboport” inside 1784.

Rather than trying to make each Rookie “smart,” Naver Labs designed the bots to transmit data from their cameras and sensors to ARC, a cloud-based system that acts as a brain for all of the robots in the fleet.

ARC is able to cross reference images from a Rookie’s camera with a “digital twin” of the building’s interior, identifying the robot’s location in the building within 6 inches. It can then tell it the most efficient route to take to its destination, and because this communication happens over a local 5G network, there’s hardly any lag.

In addition to minimizing each individual robot’s processing power needs, using a central “brain” also makes it easier for Naver Labs to manage its robot fleet, which is expected to number 100 by the end of 2022.

“In such a large building, we do believe in the need for a central control system for harmonious and smart control for 100 robots to move — we have to manage that properly,” Sangok Seok, CEO of Naver Labs, told Fast Company.

The Rookie robots are just one part of what makes 1784 forward-looking. There’s also a two-armed robot called “Ambidex” whose job it is to clean the Rookies, and the building also houses a “startup factory,” an AI research center, and a dedicated space for testing mobile tech on more than 200 devices.

Employees also have access to a healthcare clinic that Naver Labs is using to develop tech for the medical industry, including an AI that listens to conversations between patients and doctors and extracts relevant data for medical records.

That sort of AI technology — and the Rookies’ facial recognition tech — makes 1784 sound a bit “1984,” but Naver says it’s in compliance with South Korea’s data privacy and surveillance laws.

Naver also appears to be taking steps to balance its need for data with employee’s comfort.

According to a report by the New York Times, Rookie relies primarily on its front-facing camera for navigation, and that camera is positioned to film from employees’ waists down — if the bot is knocked over or its camera angle changes, it issues a warning that a face might be filmed.

It’s not clear if the warning is issued if the person is naturally in the robot’s line of sight, because they’re sitting, for example. The bot will use images from other cameras if ARC can’t place it using the front-facing one, too, meaning it’s not clear if employees always know when they’re being filmed.

Still, Naver’s goal is to eventually sell products developed at 1784 to customers, and that might happen sooner rather than later — on November 29, it gave Saudi Arabian officials a tour of 1784 in the hopes of being asked to help build the nation’s in-development smart city, NEOM.

By using its own headquarters as a testbed for this tech, Naver is figuring out how to make people more comfortable with these products before they’re out in the world, whether it’s by giving robots “eyes” or teaching them the least-creepy place to stand in an elevator. 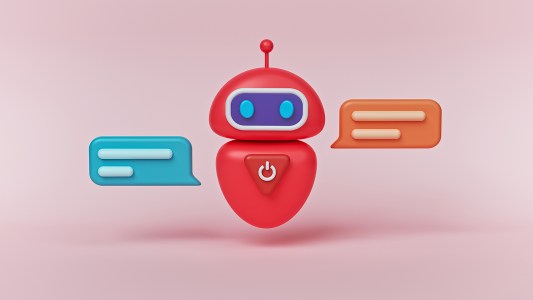 AI
An interview with ChatGPT about itself
By Kristin Houser and Daniel Bier
Subscribe to Freethink for more great stories
Subscription Center
Sections
Video
Freethink
Subscribe
We focus on solutions: the smartest people, the biggest ideas, and the most ground breaking technology shaping our future.
Subscribe