Adeno-associated viruses (AAVs) are common viruses that can be used to deliver therapeutic genes into the body. They were used in the first FDA-approved gene therapy to treat an inherited disease, and they are being tested in a potential COVID-19 vaccine.

But, sometimes, they can trigger side effects that block the gene therapy. In rare cases, the immune response to these normally harmless viruses can be severe. Avoiding this immune overreaction will be the key to enabling more people to benefit from gene therapy.

Now, an international team of researchers has figured out a way to cloak the AVV so it can sneak past the human immune system and deliver its gene therapy payload undetected — essentially, a virus invisibility cloak.

When the AAV enters the body, it can activate a protein called the “toll-like receptor 9” (TLR9). Once activated, the protein launches the immune system’s response against the AAV.

Usually, this natural response would be good for the human body, actively eliminating foreign invaders that could cause illness. However, in gene therapy, the AAV, although foreign, is engineered to deliver a therapeutic DNA payload, not virus DNA, to the body’s cells. (For instance, fixing a gene that causes blindness.)

If the body shoots the messenger, the treatment is wasted, at best. (At worst, in rare cases, the immune overreaction itself can be deadly.)

So a team of geneticists, led by George Church and Ying Kai Chan at Wyss Institute at Harvard, figured out a way to hide the AAV shell from the immune system, bypassing the protein sensor and thwarting the counterproductive immune response. Chan and Chuch are both co-founders of the gene therapy startup Ally Therapeutics.

To disguise the virus’s shell, they threaded small snippets of human DNA into the AAV to prevent TLR9 from activating — allowing the particle to pass for human, neutralizing the immune system’s alarm system.

In the study, published in Science Translational Medicine, they tested their “vector cloak” against human cells in a petri dish and found that the cells showed a dampened immune response to the disguised AAV. Studies in pigs and mice also showed promise, with reduced immune responses and improved efficacy (meaning, the AAV was able to fix the genes).

While they were engineering an AAV shell that could evade the immune system, another team (also at the Wyss Institute and mentored by Church) trained an artificial intelligence algorithm to quickly discover many potential candidates for their cloaking system.

Conventional methods for finding a different shell capable of deceiving the immune system are time-consuming and costly. To speed up the process, the team looked to machine learning and shared their results in Nature Biotechnology.

They trained the machine learning model with data on many different virus shells, then used it to design new variants. They found that nearly 60% of the new variants the AI invented were viable as AAV vectors. The old methods take much longer, with useful results less than 1% of the time.

“Reaching this level of diversity in the capsid (shell) segment is an important milestone that we can build on to find immune-evading capsids for gene therapy,” said Sam Sinai, an author on the study and graduate student at the Wyss Institute. 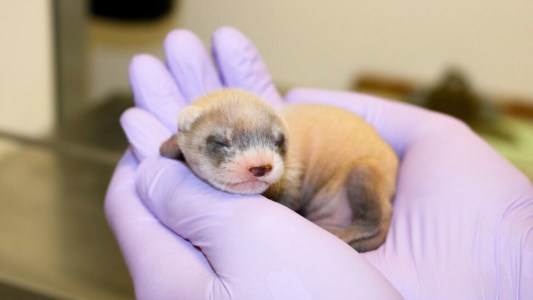 A black-footed ferret clone could inject a much-needed dose of genetic diversity into her species, which is on the brink of extinction.