Every black-footed ferret alive today is descended from a group of just seven individuals, with one exception: Elizabeth Ann.

That 10-week-old kit is a clone of “Willa,” a ferret that lived 30 years ago. She’s the first clone of an endangered species native to North America — and her birth could help bring the black-footed ferret back from the brink of extinction.

The black-footed ferret is native to the North American Great Plains, where they fill an important role in the ecosystem — as predators, they help keep prairie dog populations in check, and as prey, they provide food to eagles, owls, and other animals.

In the 1900s, habitat loss and dwindling prairie dog populations brought the black-footed ferret to the brink of extinction, and in 1987, the U.S. Fish and Wildlife Service (USFWS) was in possession of what were thought to be the last 18 members of the species.

Through captive breeding programs, the USFWS brought the population’s numbers back into the hundreds, but all of the ferrets alive today are descended from just seven of those initial 18.

That’s a problem, because it means that all black-footed ferrets are essentially half-siblings, and a lack of genetic diversity has left the animals more vulnerable to pathogens, diseases, and disorders linked to inbreeding.

That’s why Elizabeth Ann could be a boon to her species.

In 1988, the San Diego Zoo preserved skin cells from Willa — one of the 18 captive black-footed ferrets that didn’t produce any offspring — in its Frozen Zoo, a collection of genetic material from more than 1,000 species.

When Revive & Restore, a nonprofit that helps solve conservation problems with genetic engineering, sequenced Willa’s genome in 2013, it discovered that she had three times the genetic diversity of any living black-footed ferret.

In 2018, the USFWS granted Revive & Restore its first permit to research cloning an endangered species.

She is a win for biodiversity and for genetic rescue.

The nonprofit then partnered with ViaGen — a startup that clones pets, for hefty fees — to create embryos from Willa’s preserved cells, which were implanted into a domestic ferret surrogate.

When ViaGen confirmed that the ferret was pregnant, she was transported to Colorado’s National Black-Footed Ferret Conservation Center, where she gave birth to Elizabeth Ann on December 10.

Two months later, genetic testing proved that the kit was a clone of Willa.

Ferrets of the Future

The plan now is to make more clones of Willa, as well as a male black-footed ferret whose cells are preserved at the Frozen Zoo.

If Revive & Restore and its partners can successfully breed those clones, their offspring could inject a much needed dose of genetic diversity into the black-footed ferret population.

“Genomics revealed the genetic value that Willa could bring to her species,” Revive & Restore’s Executive Director Ryan Phelan said in a press release. “But it was a commitment to seeing this species survive that has led to the successful birth of Elizabeth Ann.”

“To see her now thriving ushers in a new era for her species and for conservation-dependent species everywhere,” he continued. “She is a win for biodiversity and for genetic rescue.”

Still, as remarkable as she is, Elizabeth Ann is just one part of the greater effort to save the black-footed ferret species.

“Maintaining and increasing wild populations and suitable habitat continues to be essential for black-footed ferret recovery and will remain a priority for the Service,” Noreen Walsh, director of the USFWS’s Mountain-Prairie Region, said in the press release. 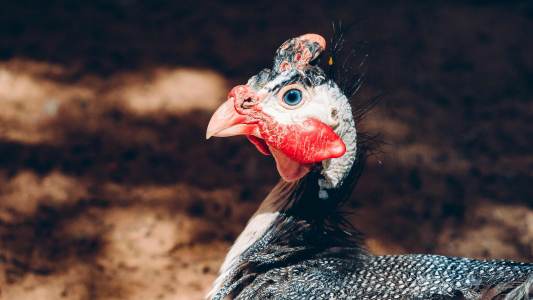 Paleontology
Gators and guineafowl may help us understand how dinosaurs moved
Subscribe to Freethink for more great stories
Subscription Center
Sections
Video
Freethink
Subscribe
We focus on solutions: the smartest people, the biggest ideas, and the most ground breaking technology shaping our future.
Subscribe