A new study suggests that sound plays a much larger role in animal development than previously thought, affecting how a variety of species prepare for life outside the womb or egg.

“(W)hat is most striking from the evidence we’ve gathered is how common it is for embryos across species to rely on sound information,” researcher Mylene Mariette of Deakin University said in a press release.

How it works: Some animals listen and react to the world outside while they’re still just embryos, taking cues from both their parents and their environments that guide their development.

The phenomenon is called “acoustic developmental programming,” and while the developing animals don’t consciously know that they’re receiving these instructions, that doesn’t stop their bodies from responding to the sounds.

“This is because sound directly impacts behavior and physiology, without any conscious processing,” Mariette said.

What’s new: While researchers had seen examples of acoustic developmental programming before, this was the first study to document just how prevalent it is amongst animals.

Zebra finch parents, for example, have a high-pitched noise they make while incubating their eggs if it’s very hot out. Baby birds whose parents make those noises, the researchers say, respond by growing slower — a trait that helps them survive in higher temperatures once they’re born.

Sound directly impacts behavior and physiology, without any conscious processing.

When crickets are nymphs (the stage between egg and adult), females will develop faster if they hear males’ reproductive “songs” — that’s so they can take advantage of the opportunity to mate.

Male nymphs, meanwhile, hear those songs and interpret them as more sexual competition — in response, they slow down development and invest more resources into reproduction.

Sound matters: Now that we know that acoustic developmental programming is common across species, it could change how we study animal development, particularly in terms of nature vs. nurture.

“If this result is really consistent, I think this may have a very big impact on how we think about what is innate behavior and what is learned behavior,” Wang-chun Liu, a Colgate University neuroscientist, who wasn’t involved with the study, told Popular Science. 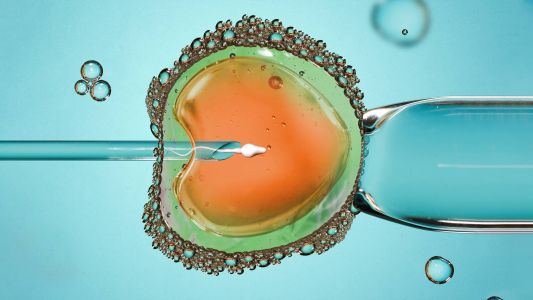 PGT-A, a genetic test used to screen embryos for aneuploidy prior to in vitro fertilization, appears to be excluding many viable options.

Fertility
"Defective" embryos can actually self-correct in the womb
Subscribe to Freethink for more great stories
Subscription Center
Sections
Video
Freethink
Subscribe
We focus on solutions: the smartest people, the biggest ideas, and the most ground breaking technology shaping our future.
Subscribe