Before baby mice can actually see anything, their brains are already preparing them to process visual information, according to a new Yale University study.

“It’s like dreaming about what you are going to see before you even open your eyes,” lead researcher Michael Crair said in a press release.

Growing up fast: Baby mice are born blind and only open their eyes at around 13 days old. But by three weeks, they’re ready to start leaving the nest.

That means they don’t have much time to get the hang of seeing things before they’re forced to find food — and avoid becoming it.

“At eye opening, mammals are capable of pretty sophisticated behavior,” Crair said. “But how do the circuits form that allow us to perceive motion and navigate the world?”

Retinal waves: The answer, it seems, might be linked to a phenomenon called retinal waves.

The retina is a thin layer of tissue that converts the light that enters the eyes into electrical impulses that the brain can then process — that’s how we see the world around us.

Several decades ago, researchers discovered waves of impulses sweeping across the retinas of baby mice before they opened their eyes. However, they’ve never been sure what these retinal waves do.

Baby mice brains: For their new study, the researchers scanned the brains of baby mice before their eyes were open. From these scans, they discovered that between days 8 and 11, the retinal waves started to flow in one direction.

This directionality was very similar to the flow of activity expected if the mice had their eyes open and were moving forward through the world — it was like their brains were imagining what that would look like, even though the mice had never seen anything before.

When the pattern of retinal waves was disrupted, the baby mice’s ability to detect motion was impaired once their eyes were open.

“This early dream-like activity makes evolutionary sense because it allows a mouse to anticipate what it will experience after opening its eyes, and be prepared to respond immediately to environmental threats,” Crair said.

Why it matters: Mice aren’t the only mammals prepped to use their eyes as soon as they’re open — humans aren’t leaving the crib at three weeks, but we can perceive objects and follow a moving finger with our eyes as newborns.

By studying how the brains of baby mice prep them to process what they’re going to see, we might glean new insights into our own early vision system or the role evolution can play in preparing us for the world. 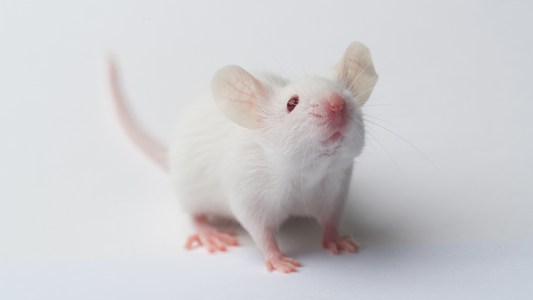 A treatment that reversed age-related memory loss in mice could one day treat or prevent such cognitive decline in older people.