“When it comes to regenerative medicine, the goal here is to engineer a uterus using the patient’s own cells,” Dr. Anthony Atala told Bio Eats World. Atala’s team from the Wake Forest Institute for Regenerative Medicine published a study last summer detailing how they were able to achieve such an incredible feat.

“The concept is that you go into the patient and take a very small sample of tissue — less than half the size of a postage stamp. You would then expand those cells outside of the body and create a new structure,” said Atala, “that you can then implant back into the body to basically form a new uterus that would do what the normal uterus is supposed to do.”

Why It Matters For Humans

About 6% of women undergoing infertility treatment have some kind of known uterus dysfunction. For example, there may be a structural problem with the uterus that prevents the woman from getting pregnant or carrying a baby to term.

6% of women undergoing infertility treatment have some kind of known uterus dysfunction.

Currently, there’s not a whole lot we can do to treat this kind of infertility. In recent years, uterine transplants from live or deceased donors have proven successful — but, the procedure is still pretty rare. The transplant depends on compatible donor organs, and it requires the recipients to take immunosuppressive drugs. Fewer than 10 babies in the U.S. have been born via a transplanted uterus.

But if we can bioengineer a uterus from a woman’s own cells, women with uterine infertility will have an option that isn’t dependent on organ donors and carries no risk of organ rejection.

In this study, 78 rabbits with damaged uteruses were assigned to four different groups.

The experimental group had most of their uterine tissue removed. Their uteruses were then repaired using a biodegradable scaffold, seeded with stem cells derived from their own cells collected from the initial surgery.

Women with uterine infertility will have an option that isn’t dependent on organ donors and carries no risk of organ rejection.

Three months after the implantation, all of the scaffolds had biodegraded, leaving behind only the cells.

And by six months, the rabbits were introduced to fertile male rabbits, and, well…they did what rabbits do best.

Four out of 10 treated rabbits had normal pregnancies. “Our results indicate that the tissue-engineered uteri responded to the expansion and mechanical strains that occur during pregnancy,” co-author of the study, J. Koudy Williams, told GEN.

The majority of scientific studies in animals use mice. But rabbits are better for regenerative studies because they’re larger.

“When it comes to regeneration and tissue engineering, everything regenerates in mice or a rat because the distance is so small,” said Atala on Bio Eats World.

“We established several decades ago that the maximum distance for tissue regeneration is about half a centimeter from any edge. And basically, in animals, you can regenerate pretty much anything within that distance.”

“So you really do need critical-sized defects to show that what you’re doing with your cells and your scaffolds are in fact responsible for the regeneration of the tissue and it’s not just the natural ability of the rodent to regenerate.”

The fact that it works in larger animals gives us more reason to believe that it’ll work in humans.

And that would be great news for the field of regenerative medicine in general. The uterus is an incredibly complex organ — it expands and contracts as needed from the moment of conception to birth. If tissue engineering is proven successful in a uterus, that bodes well for the possibilities of regenerating other organs, too. Regenerative medicine has emerged in recent years as a potentially viable option for overcoming organ shortages.

But there’s still a long way to go to get from rabbits to humans — and that includes even larger animal studies. 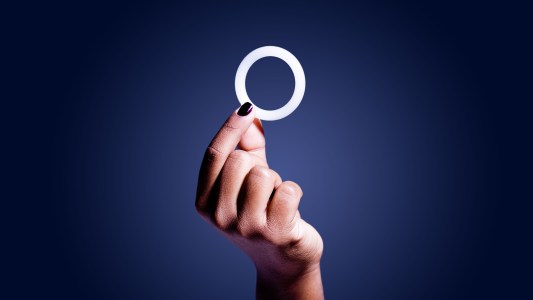 A vaginal ring that serves double duty as both long-term contraception and convenient HIV prevention showed promise in a small study.