Spoiler alert: Reading this article could change your results for the Divergent Association Task test.

What do “table, Yoga, polymath, she, orbit, kingdom, booger, thought, bowline, and milk” have in common?

Nothing — except that these words came from my mind, and that apparently makes me pretty creative.

These ten words were my answer to the Divergent Association Task (DAT), which is taking over Twitter as people share their scores. (Don’t worry if you don’t score as high as the Twitter trend. Most people score much lower and tend not to share their results).

I scored 91.8, which is pretty good. I don’t feel as creative as my score implies. But, given that I’m a science writer, I can’t help but trust the numbers: a new study shows that the test is a reliable predictor of creativity.

How it works: The test is simple: think of ten words that have absolutely nothing in common.

Inspired by a childhood word game, the test was created by Jay Olson, a PhD grad from McGill University, and a research team from McGill, Harvard, and the University of Melbourne.

“Creativity is fundamental to human life,” Olson said in a statement. “The more we understand its complexity, the better we can foster creativity in all its forms.”

“Creativity is fundamental to human life.”

Your answer has to be tens nouns, single words, and not proper nouns. Your answers should also be spontaneous and not prompted by things in your surroundings or any forethought. (So, reading this far has likely compromised your test results — sorry, we did warn you!)

Once you’ve come up with the words and hit “submit,” an algorithm calculates the “semantic distance” between your words, giving you a “creativity score.”

The more related the words are to each other (e.g., “table” and “chair”), the shorter the semantic difference is. Whereas less related words have a greater distance and a higher score. The two most unrelated words in my list are “table” and “polymath.”

The results: Is the test an accurate measure of creativity? The short answer: yes. The DAT results from a 9,000-person research study followed the same patterns as two other standard creativity tests.

One test compared to the DAT was the Alternative Applications Task, which requires participants to come up with new uses for an object, then judges the distance between the known usage and the responses provided, reports Good News Network.

The second was the Bridge-the-Associative Gap Test, which gives participants two words and asks them to come up with a third word that connects the two. This shows creativity in the opposite direction, by finding the best connections between unrelated words.

It is more than just a vocabulary test. It can predict a particular type of problem-solving aptitude.

Olson’s study, published in the journal PNAS, shows that the simple test, with objective and automated scoring, can be just as accurate at measuring verbal creativity as the other commonly used tests. And, by testing a group from ages 7 to 70, they found that anyone can be creative — at any age.

The DAT test, as Olson explains to CNN, looks at divergent thinking and verbal creativity. While it isn’t a measure for creativity in the kitchen, it is more than just a vocabulary test. It can predict a particular type of problem-solving aptitude.

“Our task measures only a sliver of one type of creativity,” Olson said. “But these findings enable creativity assessments across larger and more diverse samples with less bias, which will ultimately help us better understand this fundamental human ability.”

Urban Living
New “risky” playground could make kids anti-fragile
A new playground in Melbourne’s Southbank is the work of artist Mike Hewson, who introduces “risk” back into play.
By Sanné Mestrom

AI
I used generative AI to create pictures of painting robots, but I’m not the artist — humanity is
Generative AI systems are incredible and hugely important, but they are not creative. In fact, they’re not even intelligent.
By Louis Rosenberg
Up Next 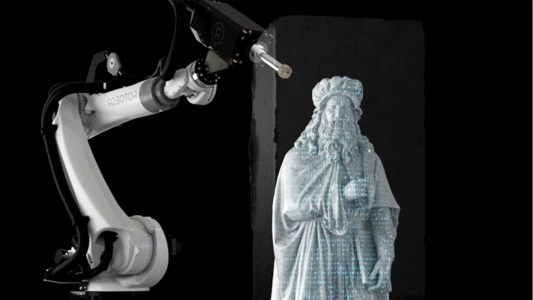 Italy’s Robotor is inspiring artists to pick up Carrara marble as a medium by delegating the laborious carving process to sculpting robots.