Deep within the cold abyss, beneath the primordial muck of the seafloor and the sediment of millions of years, ancient microbes sit between life and death … and have now been awakened!

Scientists haven’t quite unleashed Neptune’s revenge, but they have revived ancient microbes — possibly over 100 million years old — extracted from the bottom of the South Pacific.

Survivors of that unforgiving place, the ancient microbes may not only help us understand the history and capabilities of life on Earth, but open the possibility of finding life where we had previously thought it impossible.

“I think it provides some crucial information for understanding the habitability of life on Earth, of course, but also the other planets, such as Mars’ subsurface,” geomicrobiologist Fumio Inagaki told Wired.

The head of the Mantle Drilling Promotion office at the Japan Agency for Marine-Earth Science and Technology (JAMSTEC), Inagaki co-led the expedition and co-authored the study, published in Nature Communications.

“Of course, the surface of Mars may not be an ideal place for the search for life for a habitability study, but if you go deep I think there might be a possibility to find life.”

The ocean floor is covered in the detritus of life — organic matter from the blue reaches above, which dies, falls, settles, and is then eaten, starting the food chain up again. But while coastal seas teem with life and are covered in a veritable carpet of organic matter, the far reaches of the ocean floor are nearly barren.

Off the eastern coast of Australia, one finds the South Pacific Gyre, a nexus of ocean currents considered the least-alive place in the ocean. Sea cucumbers and other bizarre creatures roam the pitch-black floor, over clay and cosmic debris, devouring what precious little food they could find.

“It’s the least-explored large biome on Earth, because it covers 70 percent of Earth’s surface,”  University of Rhode Island geomicrobiologist and co-lead/co-author Steven D’Hondt told Wired, referring to the deep ocean.

“And we know so little about it.”

While researchers have known that life exists under the seafloor for over a decade — and that microbes can survive in places that were thought to be completely uninhabitable, like geothermal vents and the frigid waters of Lake Whillans, 800m below Antarctic ice  — JAMSTEC geomicrobiologist and study lead author Yuki Morono wanted to see how well they’d survive in a place with zero light and precious little food.

“Our main question was whether life could exist in such a nutrient-limited environment or if this was a lifeless zone,” Morono said in JAMSTEC’s press release.

“And we wanted to know how long the microbes could sustain their life in a near-absence of food.”

The JAMSTEC team drilled through 250 feet of sediment, 19,000 feet below the surface, to pull up samples that were 101.5 million years old.

Inside those samples were microbial life, spanning major and minor bacterial groups. They were tricky to find; the researchers had to develop specialized search techniques, including chemical tracers meant to smoke out seawater contamination (sample contamination from the present day is the bane of pre-dinosaur bacteria hunters.)

The microbes were aerobic, meaning they require oxygen to live, and there was indeed oxygen in the samples, albeit not much. Encased in an environment with little food, the microbes had simply lain dormant for eons.

JAMSTEC woke them up.

Providing the samples oxygen and nutrients, the bacteria began to multiply, increasing by four orders of magnitude in 65 days, per Science.

“It is surprising and biologically challenging that a large fraction of microbes could be revived from a very long time of burial or entrapment in extremely low nutrient/energy conditions,” Morono told the CBC.

“The most exciting part of this study is that it basically shows that there is no limit to life in the old sediments of Earth’s oceans,” D’Hondt told the CBC.

While previous samples of ancient bacteria are clouded by contamination concerns or disputes over their age, there have been other samples of ancient-yet-alive bacteria discovered, including in 15 million-year-old sediment just last year.

But the JAMSTEC team’s bacteria move the goalposts dramatically, not just reshaping how we consider life on Earth, but also beyond it.

The study shows that “microbial life is very persistent, and often finds a way to survive,” Virginia Edgcomb, a microbial ecologist at the Woods Hole Oceanographic Institution, who was not involved with the research, told Science.

And that could include our solar neighbors or even exoplanets, extraterrestrial environments once assumed to be barren. 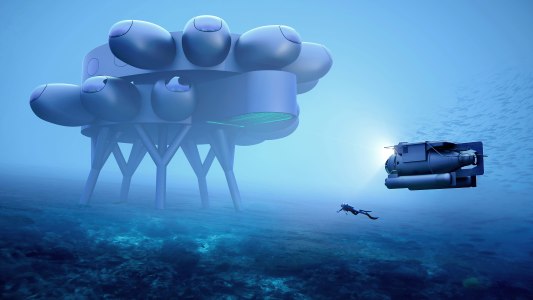 Oceans
This underwater base could become the ISS of the ocean
By Kristin Houser
Subscribe to Freethink for more great stories
Subscription Center
Sections
Video
Freethink
Subscribe
We focus on solutions: the smartest people, the biggest ideas, and the most ground breaking technology shaping our future.
Subscribe