Ask someone to name a dinosaur, and they aren’t likely to drop “Hypacrosaurus” on you.

But while the duck-billed dino might not be as well-known as the T-Rex right now, it could one day be the most famous of all the terrible lizards — because researchers from the Chinese Academy of Sciences think they may have found scraps of its DNA in a dinosaur fossil.

If proven right, it would mark the first discovery of dinosaur DNA ever, changing everything researchers thought they knew about how long genetic material can survive — but don’t start getting hyped about a real-life Jurassic Park just yet. Unbelievable findings are, sometimes, just that.

In the 1980s, researchers discovered a Hypacrosaurus nesting ground in Montana, and since then, they’ve extracted a number of eggs, embryos, hatchlings, and nestlings from the site.

Chinese Academy of Sciences paleontologist Alida Bailleul was conducting a microscopic analysis of several of these remains when one dinosaur fossil in particular caught her eye.

Bailleul discovered calcified cartilage from the skull of a Hypacrosaurus that appeared to contain cells with nuclei and chromosomes.

It was a bit of calcified cartilage from the skull of a baby Hypacrosaurus — and it appeared to contain cartilage cells complete with nuclei and chromosomes.

“I couldn’t believe it; my heart almost stopped beating,” Bailleul said in a news release.

She then teamed up with researchers from the United States and Canada to conduct a more in-depth analysis of the dinosaur fossil, including the use of chemical stains that bind to DNA.

According to the study, subsequently published in the journal National Science Review, they believe what Bailleul spotted in the dinosaur fossil is Hypacrosaurus DNA.

Not everyone agrees with the conclusions of Bailluel’s team, though.

For one, a previous study of DNA’s half-life determined that it couldn’t survive for more than 6.8 million years. And prior to this study, the oldest genetic information ever discovered was in the fossilized tooth of a rhino that lived just 1.7 million years ago.

Prior to this study, the oldest genetic information discovered was in the fossilized tooth of a rhino that lived 1.7 million years ago.

Not surprising, then, that many researchers are approaching the discovery of 70-million-year-old DNA with a healthy dose of skepticism, suggesting that any DNA the team might have found in the dinosaur fossil is probably from a more modern source, such as a microbe.

Complicating matters is the fact that other researchers can’t replicate the team’s results — the whole study is based around one particular dinosaur fossil in one particular lab.

“If a different lab could be independently sent fossils from the same site, work up their own antibodies, do their own staining and get the same results, it would make things more believable,” paleogeneticist Ross Barnett, who wasn’t involved in the study, told Scientific American.

Jurassic Park? Not Quite.

Even if Bailleul’s team did discover Hypacrosaurus DNA in the dinosaur fossil, though, don’t expect them to use it to try to bring the creature back from extinction.

In fact, her team didn’t even attempt to extract the potential DNA from the cartilage. And even if they had, they likely would’ve come away with just scraps of DNA — not anything close to what a scientist would need to recreate an entire dinosaur.

Still, even without the prospect of a real-life Jurassic Park within our grasps, the discovery of this dinosaur DNA — if that’s what it is — has major implications for how scientists study the ancient past, according to paleontologist David Evans, who wasn’t involved with the study.

“This research is still very much in its infancy,” he told National Geographic, “but the possibilities are absolutely thrilling if we suspend our disbelief, dig into the data, and continue to test and refine our ideas about molecular preservation in fossils.” 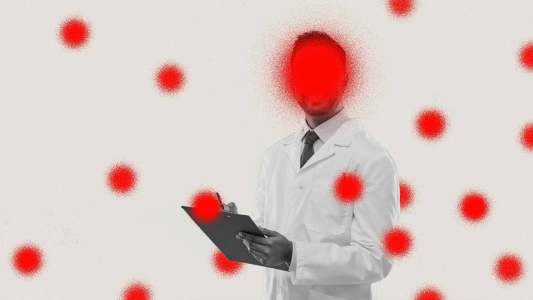 A team of researchers analyzed the COVID-19 coronavirus. Their findings debunk the conspiracy theory that the virus was lab-made.