George Church is one of the world’s most famous pioneers of genetics and biotechnology. He has made colossal contributions to the disciplines of genome sequencing, genome engineering, and synthetic biology. Among his many accomplishments is the founding of the Personal Genome Project, which endeavors to make public large data sets that include human genomes combined with information on health and other traits. Currently, the database contains information from more than 10,000 individuals.

Church is a firm believer in the medical potential of gene editing, which is already being used to treat potentially fatal genetic diseases. In theory, it could also be used to prevent physical or mental disabilities, boost the human immune system, and even enhance longevity and intelligence. Church is coordinating his research endeavors so that this day will come sooner than expected.

However, he is not without critics. Over the years, many different people, from preachers to philosophers, have voiced their concerns over the safety and ethics of gene editing. Opposition to Church’s work — along with the work of other scientists in his field — has been so persistent that Intelligence Squared, a fellow media company devoted to big ideas, hosted an online debate on the subject. Placed front and center was Church who, alongside futurist and author Amy Webb, debated some of the world’s leading opponents of gene engineering: Marcy Darnovsky, policy advocate and director of the Center for Genetics and Society; and Françoise Baylis, a professor and author of Altered Inheritance: CRISPR and the Ethics of Human Genome Editing.

The one-hour debate served as a summary of the most compelling arguments for and against using our scientific knowledge to improve the DNA of future generations. Below is an overview of those arguments, presented more or less in the order that they were brought up during the debate.

Early in the debate, Darnovsky mentioned the movie Gattaca in order to illustrate the potentially disastrous ways genome editing could affect humanity, both on an individual and a societal level. The movie, directed by Andrew Niccol, is set in a future where reproductive technologies allow parents to alter the genes of their children, making them stronger or smarter. The movie’s protagonist, Vincent, was born unedited, and he is constantly subjected to genetic discrimination as a result. He’s also locked in a lifelong conflict with his genetically enhanced brother, his superior in every way.

To Darnovsky, the dystopian society presented in Gattaca is not a work of science fiction but a convincing prediction of what will happen should genome editing go mainstream. She is especially concerned about how the service would be incorporated into a healthcare system that favors the rich at the expense of the poor. “It’s hard to believe people would be able to afford this in a world where people can barely afford [basic healthcare],” she states. Presently, success is already determined, at least in part, by privilege. Tomorrow, it could be determined by the level of gene editing parents can afford.

As a futurist, Webb loves science fiction, but stresses that movies, however entertaining or convincing, have no business informing real-world scientific research. The crux of the problem, Webb reiterates, is in the title of the debate: Genome editing is not about making better babies — it is about making babies better. “Nature is not perfect,” she explains. Every year, millions of people are born with defects in their genes that cause various diseases and disabilities. “If we can prevent human suffering,” Webb concludes, “we are obligated to do so.”

Baylis is a bioethicist. Her argument against genome editing is based not so much on science but applied ethics and health policy. Ethically, she says, parents have no right to decide whether or not to edit the genes of their own children. The freedom to have children is a basic human right. However, people are not free to decide what kind of children they have. The discussion, Baylis continues, “is actually about reproductive rights, the right to reproduce or not to reproduce.” Instead of funding genome editing, we should fight for reproductive health and the right to have abortions.

Whereas Baylis, Webb, and Darnovsky are mostly concerned with the ramifications of genome editing, Church is trying to figure out how genome editing actually works. As such, it is no surprise that he feels strongly about its potential. “Inaction,” his response to Baylis and Darnovsky begins, “is not a foolproof strategy.” The coronavirus pandemic showed what happens when we wait too long to implement scientific breakthroughs. As the world debated the ethics of vaccine mandates, hundreds of thousands of people died from their infections.

Though Church agrees that a Gattaca-type situation (i.e., where genome editing is reserved for the wealthy) is undesirable, “doing nothing because we think we don’t have the ability to regulate” is equally ill-advised. Both he and Webb say that, while it is tempting to believe genome editing would be expensive to the point that only the global elite can afford it, there is no evidence to suggest this would happen. If anything, the pandemic has shown us that medications like the coronavirus vaccine can be made relatively affordable.

Even if there is no concrete evidence that genome editing will be abused financially and politically, Baylis replies that one does not need academic studies to conclude that the world has too many countries that lack stable and responsible governments that could implement the ethical and monetary infrastructure necessary to pursue genome editing in a manner that is “sustainable, fair, and morally permissible.” Sure, the pandemic produced an affordable vaccine, but it has made the ultra-rich richer and Big Pharma bigger.

Darnovsky reminds us that the societal danger of genome editing is not just the stuff of fiction but has been demonstrated in recent history. During the Second World War, Nazi Germany developed an unhealthy obsession with eugenics. The odious notion that some races are genetically superior to others is by no means a thing of the past. Articles discussing genome editing often feature pictures of blond, blue-eyed babies, and the majority of sequenced DNA is Caucasian.

One of the more moving (but also questionable) arguments against genome editing was made by Baylis. A powerful orator, she described how her mother suffered from Alzheimer’s disease during the final years of her life. Though it was incredibly difficult to watch her mother slowly lose the wit and independence that once defined her, Baylis is convinced that the experience of caring for her mother, however painful, helped her grow as a person — an iteration of Friedrich Nietzsche’s infamous axiom, “What does not kill me, makes me stronger.”

Baylis’ story proved to be one of the main points that audience members took home from the debate, as the issue of whether caring for someone with Alzheimer’s disease can be considered a constructive experience came up several times during the subsequent Q&A. Walter Isaacson, author of The Code Breaker: Jennifer Doudna, Gene Editing, and the Future of the Human Race, said that if he could edit the illness out of his own family history, he certainly would. But one could also make the case that such a decision should be made by the patient, not their doctors or loved ones.

After the event concluded, Intelligence Squared conducted a poll to determine which side won over the most voters. Though Baylis and Darnovsky emerged victorious, that does not necessarily mean their arguments are superior. Who do you think won? 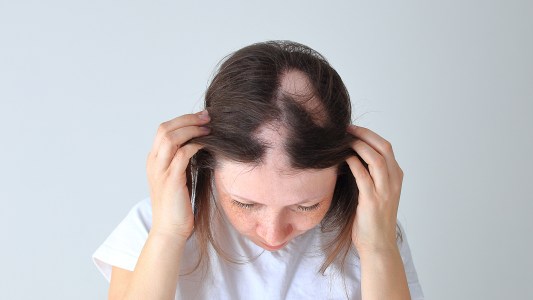 A common arthritis drug may be an effective alopecia treatment, based on a trial in which it helped people regrow their hair in just 36 weeks.