An underwater robot has recorded stunning footage of a glass octopus, an almost completely transparent cephalopod rarely caught on film.

The glass octopus: Vitreledonella richardi — the technical name for the glass octopus — is a small creature, weighing just one ounce with a length of less than 17 inches.

Its entire body is transparent except for its eyes, optic nerve, and digestive tract. This helps the glass octopus survive in the wild, camouflaging it from predators and helping it sneak up on prey.

The challenge: The glass octopus was first discovered in 1918, and it can be found in tropical and subtropical waters across the globe.

However, sightings of the stunning creature are rare because it’s small, lives at depths light can’t reach, and is, well, supposed to be hard to see.

“The ocean holds wonders we haven’t even imagined, much less discovered.”

For that reason, most of what we know about the creature has been gleaned from remains found in the bellies of its predators, and those can only provide limited information.

What’s new? On July 8, a team of marine scientists reported the end of an expedition to the central Pacific Ocean aboard the Schmidt Ocean Institute’s Falkor research vessel.

During the 34-day expedition, a robot named SuBastian was sent to the seafloor to record footage — and caught two sightings of a glass octopus.

Best of the rest: The glass octopus wasn’t the expedition’s only remarkable discovery.

The scientists snagged footage of another elusive animal, the whale shark, and saw crabs stealing fish from each other — unique behavior for the species.

While on the ship, they also conducted experiments on the immune systems of corals and sponges that could inform future medical research.

“The ocean holds wonders and promises we haven’t even imagined, much less discovered,” Wendy Schmidt, co-founder of Schmidt Ocean Institute, said in a press release.

“Expeditions like these teach us why we need to increase our efforts to restore and better understand marine ecosystems everywhere,” she continued, “because the great chain of life that begins in the ocean is critical for human health and wellbeing.” 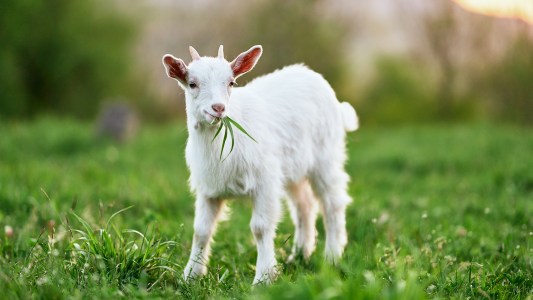 By having goats eat the dry vegetation that fuels wildfires, Californians can prevent the blazes from spreading into populated areas.