Invisibility is no longer science fiction. Researchers have developed a unique light wave that, when beamed through an object, makes the object appear invisible to cameras and even the human eye.

The backstory: If you think invisibility cloaks are only for wizards, think again. Scientists have been trying to solve this challenge since long before Dumbledore bestowed the hallow cloak upon Harry Potter, and invisibility tech is for real.

With the tricks of the camera, scientists can capture pictures of what’s behind an object, then project them onto the object’s surface, making it seem to disappear.

But they are also working on something more legitimate: ways to bend light around an object, essentially making it vanish, or simply scattering light, obscuring the thing from view.

Last year, Hyperstealth Biotechnology Corporation revealed a material, called Quantum Stealth, that when draped over a person makes them appear to vanish. However, the material’s efficacy is limited since the effect depends on the angle from which it is viewed, and the hidden subject must be positioned at a specific distance.

There is still a long way to go before we have a Potter-style invisibility cloak, but researchers at Austria’s TU Wien and the Netherlands’ Utrecht University are one step closer to a solution.

How it works: We can see objects because light reflects off their surfaces and onto the photoreceptors of the human eye. But the team found a unique light wave that, when passed through a solid object, projects onto the surface of an object in the background. So we see the background object — essentially rendering the foreground object invisible.

“Each of these light wave patterns is changed and deflected in a very specific way when you send it through a disordered medium,” physicist Stefan Rotter from TU Wien said in a statement.

To find the magic light wave, the team beamed a light at an opaque layer of randomly arranged zinc oxide nanoparticles. They calculated how the light was scattered by the zinc oxide powder and how it would scatter if the powder weren’t there at all.

In work published in Nature Photonics, they found the light waves projected the same image onto a detector on the other side of the zinc oxide powder as if the powder wasn’t even there.

“The feature that these fields resemble those in free space could be very useful for looking deep inside highly scattering materials that are typically very challenging to work with,” Rotter told The Independent.

The special light waves seem to defy the laws of light reflection. The tailor-made light beam was not changed by the object it passed through — only dimmed slightly — resulting in almost perfect invisibility.

Why this matters: The team envisions their discovery could be used for medical imaging or biomedical research.

There are still challenges to overcome — currently, the movement inside biological systems, like blood flow, is too much for the special light beam to work. For now, the team hopes scientists could use the technology to peer into tiny objects that are difficult to study — like a biological cell.

But Rotter anticipates that the tools will one day be fast and cheap enough for more advanced applications. 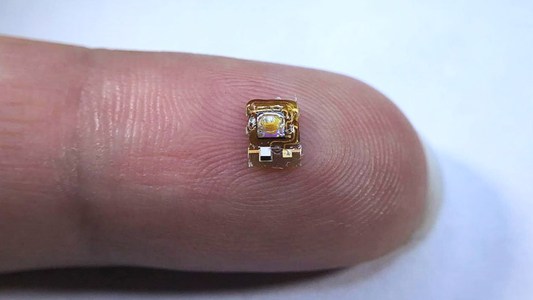