A new limb regeneration treatment allowed adult frogs to regrow functional legs lost to amputation — and its developers have already moved on to tests in mammals.

The challenge: Some animals, such as salamanders and starfish, can regenerate body parts, sprouting new tails or arms to replace missing ones.

Humans do have some regenerative capabilities — we can regrow up to 75% of our livers, and as children, we can even regenerate amputated fingertips — but if we lose a limb, a new one isn’t growing back.

The idea: Some researchers think humans have more regenerative abilities than we can currently tap into, though.

“Cells already know how to make all the organs in your body — they did it once during embryonic development and that information hasn’t gone anywhere; it’s still there,” lead researcher Michael Levin of Tufts University told NBC News.

“What we need to be doing is trying to discover what triggers will convince the cells to do whatever it is that we want them to do,” he continued.

While these animals typically only produce a pointy stump where a leg once was, frogs that received the treatment grew leg-like structures with muscles, bones, nerves, and more in about 18 months.

“They weren’t perfect cosmetically,” Levin said, “but they were pretty darn good legs” — noting that the legs were good enough for the frogs to swim again.

How it works: In animals with regenerative powers, the first step to regrowing a limb is forming a clump of stem cells at the site of the amputation. Within 24 hours, this mass is covered by skin cells that will protect it during the regrowth process.

But when an adult frog (or human) loses a limb, its body focuses on generating scar tissue to cover the opening. This prevents additional blood loss and protects against infection, but it also stifles any potential limb regeneration.

“There is nothing leg-specific about the drug cocktail … we did not try to tell the cells how to make a leg.”

To get frogs to respond to an amputation more like salamanders, the researchers developed a thimble-like silicon cap they called a “BioDome.” They then filled it with a gel containing five drugs expected to help prevent scar tissue formation and encourage regeneration.

“There is nothing leg-specific about the drug cocktail,” Levin told the Wall Street Journal. “In other words, we did not try to tell the cells what to do, how to make a leg, what does a leg look like.”

The study: To test the limb regeneration treatment, the researchers amputated the hind legs of 115 anesthetized African clawed frogs.

They immediately placed the gel-filled BioDome over the amputation wounds of some of the frogs and left it there for 24 hours. Others got the BioDome with no gel for 24 hours, and a third group received no treatment.

“This is the point when the cells are trying to decide, ‘Are we going to seal the wound and sit tight? Are we going to regenerate?’” Levin said. “Right at that process is the opportunity to change their plan.”

The researchers then watched the frogs for 18 months, and while the BioDome-only group’s limbs grew slightly more developed than the control group’s, the frogs in the treatment group regrew nearly complete limbs.

Looking ahead: The researchers have already begun testing their limb regeneration treatment in mice, but they anticipate it’ll be much harder to get it to work in mammals than in frogs, which naturally regrow something after limb loss, even if it isn’t exactly a leg.

Human trials would be even farther out, but if the treatment can translate to people, it would be the ultimate biohack, potentially preventing millions of humans from having to adjust to life with missing limbs. 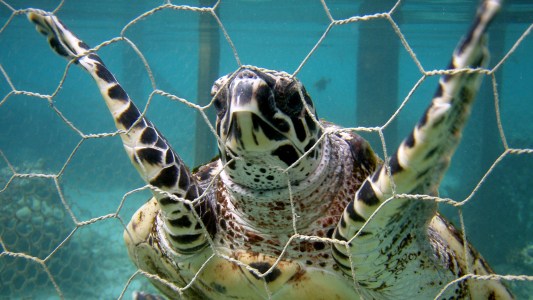 Adding green LEDs to gillnets can reduce bycatch of sharks, turtles, and other animals without affecting the catch of desired species.