Teeny-tiny living robots made their world debut earlier this year. These microscopic organisms are composed entirely of frog stem cells, and, thanks to a special computer algorithm, they can take on different shapes and perform simple functions: crawling, traveling in circles, moving small objects — or even joining with other organic bots to collectively perform tasks.

This is the first “living, programmable organism,” and it is somewhere between what we consider a traditional robot and an animal. Since they’re made of living tissue, these bots can self-repair if ruptured — so, scientists hope this breakthrough will help us further develop self-repairing soft robots. Ultimately, however, the goal for these little creatures is that they will be able to do really useful things like clean up microplastics, digest toxic materials, and even deliver drugs inside our bodies.

These machines are referred to as xenobots, because they’re composed of the stem cells of the African clawed frog (Xenopus laevis). Researchers combined embryonic stem cells from the heart — which give the bot movement since these cells naturally expand and contract — and the skin, which provides a rigid, protective structure. Each xenobot has about 500 to 1,000 living cells and is less than 1mm long.

The researchers conjured up random configurations of the two types of cells. Some were shaped like wedges, others like arches. Each xenobot’s unique structure determined how it would behave — would it shuffle along the bottom of the petri dish, swim, or link up and do donuts around the others? (The New York Times has some amazing videos of this you should check out).

Computer scientists built a virtual world for digital copies of the xenbots to play in. A fancy algorithm was designed to help identify the most promising structures. (The algorithm basically mimics natural selection by looking at how possible tweaks to the structures may affect the bot’s ability to complete various tasks).

“It turns out that it is very difficult to design an organism from scratch. So we tell the computer what we want the organism to do, and the computer performs a trial and error process, creating and simulating millions of virtual creatures,” says Sam Kriegman, a University of Vermont PhD student and co-author of the study.

We tell the computer what we want the organism to do, and the computer performs a trial and error process, creating and simulating millions of virtual creatures.

Many xenobots ended up being unuseful blobs and “natural selection” did its thing and weeded them out. Others, however, showed potential. Their structures kept getting “inherited” and “mutated” in the algorithm until researchers were able to perfect their designs in the petri dish.

Since they’re made of cells, these machines have a real biological clock. They only have enough cellular power to last about a week — after that, they naturally decompose.

“These xenobots are fully biodegradable,” says Joshua Bongard, co-author of the study. “When they’re done with their job after seven days, they’re just dead skin cells.” This gives xenbots an advantage over other human-made machines composed of things like concrete, plastic, steel, and chemicals, which can be harmful to the environment and our health when they degrade.

Right now, these xenobots can complete fairly simple tasks in their petri dishes. But researchers believe this could be a stepping stone to programming more complex tasks, which would help advance fields like precision medicine and regenerative medicine. The bots also have the potential to help with environmental cleanup tasks, too.

“We can already see the rudiments of useful work: swarms of xenobots tend to work together to push pellets in their dish into neat piles,” Kriegman told the Harvard Crimson. “We can imagine future xenobots doing the same thing with microplastics in the ocean: aggregating tiny bits of plastic into a large ball of plastic that a traditional drone can gather and bring to a recycling center.”

At the moment, scientists are focused on learning how cells communicate with each other and with the algorithm.

“There’s all of this innate creativity in life,” Bongard told the University of Vermont. “We want to understand that more deeply — and how we can direct and push it toward new forms.” 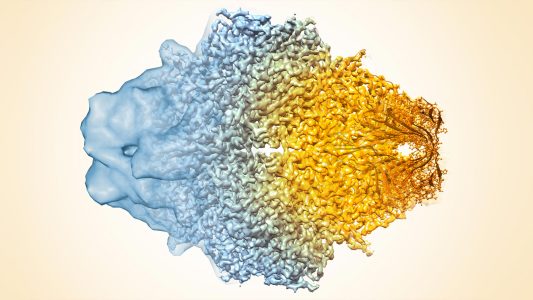 With improved tech, two teams have sharpened cryo-electron microscopy to be able to see individual atoms.

Biology
It's now easier to see individual atoms, thanks to new tech
By B. David Zarley
Subscribe to Freethink for more great stories
Subscription Center
Sections
Video
Freethink
Subscribe
We focus on solutions: the smartest people, the biggest ideas, and the most ground breaking technology shaping our future.
Subscribe