When Johnny Matheny lost his left arm to cancer in 2008, he tried almost every type of prosthetic arm on the market. They worked like they were supposed to, but they couldn’t replace his hand. Then he met Dr. Albert Chi and the prosthesis that would change his life forever.

Chi is the director of the Targeted Muscle Reinnervation Program at Johns Hopkins University. The advanced prosthetic arm he and his colleagues developed has the potential to usher in a new era of prosthetic capabilities. It uses osseointegration (that’s right, a titanium metal rod fused into remaining bone mass) to connect to the wearer’s arm, and it moves based on nerve signals from the wearer’s muscles.

And Johnny gets to wear it.

“I just called myself an old backwards country hillbilly. Now they tell me that I am one of the most technically advanced people in the world.”

“I just called myself an old backwards country hillbilly,” Johnny says of who he was when he met Chi. “And now they tell me that I am one of the most technically advanced people in the world.”

In our episode, you can see exactly what Johnny means by that. But you should also keep in mind that this is only the beginning, because Johnny and his new arm could be a game changer for the millions of people living without a limb.

Wearables
New VR body suit lets you see inside your body while you exercise
A system for monitoring motion and muscle engagement could aid the elderly and athletes during physical rehabilitation.
By Rachel Gordon | MIT CSAIL

Bionics
Can your mind ever “own” an extra body part?
A robotic finger can feel like a part of our hand after just a short time using it, suggesting that our brains can “own” extra body parts.
By Kristin Houser
Up Next 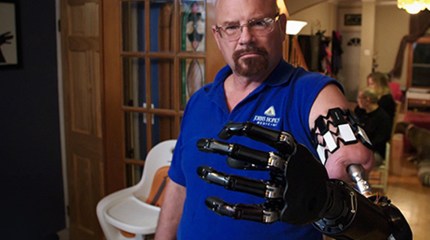 After losing part of his arm to cancer, Johnny now has one of the world’s most advanced prosthetics.