In the 2010s, headlines about sports and the brain were mostly terrible: veteran athletes with a dozen concussions, and the leagues that still refuse to really change things. But with the giant exception of head injuries in contact sports, being an athlete is good for your body and your brain. A new study shows that athletes in different sports are all better at quieting their brains and focusing on what’s really going on. The researchers say this could even mean prescribing sports for people with audio processing disorders.

Our brains make background noise all the time, sometimes loud enough that it might even wake us up from sleep.

Northwestern University has a lab for auditory neuroscience called Brainvolts. In 2018, they used a National Institutes of Health grant to team up with Northwestern’s Division 1 sports teams to study brain topics like concussion from the point of view of hearing and balance. With a huge pool of gifted undergrad athletes and one of the best grad schools in the country, Brainvolts director Dr. Nina Kraus is in a great position to do this research.

To measure how people react to noise, Dr. Kraus’s team put sensors on the scalps of almost 1,000 people, about half athletes and half non-athletes who were otherwise similar. The sensors measure the activity in the auditory processing part of the brain. Our brains make background noise all the time, sometimes loud enough that it might even wake us up from sleep. Scientists say the noise is like static on the radio, and if you can’t tune in well, trying to hear your own big thoughts can be like just missing the right radio frequency and hearing a small voice through a sea of static.

People in the experiment heard a noise — just the syllable “da” over and over (guess they weren’t Russians) —and the scalp sensors measured brain noise and how much the people’s brains reacted to the sounds. The team found that athletes had a much bigger disparity between the volume of their brain noise and the volume of the “da” they heard. What surprised the scientists, though, was that athletes were able to hear the sounds better because they had mentally quieted their brain static. This is different from, say, musicians, who have learned to hear sounds more loudly while their brain static stays the same.

There is definitely a “causation or correlation” question in this study. It’s neat that athletes have quieter brains, but having quieter brains could lead them into sports, not the other way around. Dr. Kraus’s team is still working on another study of athletes with concussion injuries, which can also affect how we hear noise in our brains and sounds around us.

The new study shows that athletes in different sports are all better at quieting their brains and focusing on what’s really going on.

With more data, Brainvolts could find out which thing causes the other, and if head injuries or auditory processing disorders could benefit from some kind of athletic therapy. The athletes Dr. Kraus’s team tested didn’t only play team sports with noisy crowds and lots of other people — even the runners and golfers had quieter brains. A day at the driving range, for medicine? If you insist. 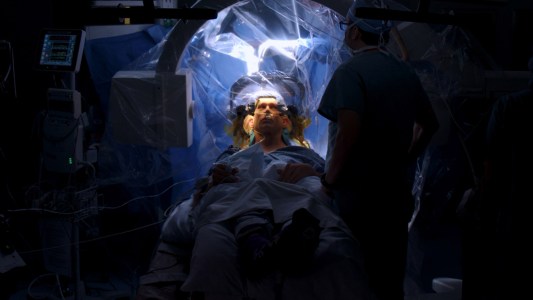 Deep brain stimulation surgeries have the power to relieve the symptoms of Parkinson’s, Tourette’s, and other involuntary movement disorders.