A shapeshifting virus, which makes its home in the near-boiling, acidic hellscape of volcanic hot springs, has finally given up its secrets — and they could be used to create new kinds of drugs and vaccines.

The volcano virus can change its shape, growing tails, which can then bulge like a well-fed snake. The bizarre virus can do this thanks to slippery, “greasy” proteins that  can slide past each other.

These not only allow the virus to change its shape but also protect its DNA from its toxic, acidic environment.

In addition to showing us how to create new tiny molecules with similar powers, these greasy proteins may also help explain viral evolution.

“Viruses can pose great threats to human health, as we see from the COVID-19 pandemic,” lead researcher Edward Egelman, of the University of Virginia School of Medicine, said in a statement.

“It is thus crucial that we understand more about how viruses have evolved. But we can also learn from viruses, and create new technologies based upon the principles found in these very simple structures.”

A shapeshifting virus which makes its home in volcanic hot springs has finally given up its secrets — and they could be used to create new kinds of drugs and vaccines.

Lemon aid: The majority of viruses have landed, through billions of years of mutation and natural selection, on two basic shapes: rods and spheres.

There’s some notable deviants, though — Ebola and its ilk, which look like tangled strings — and unusual viruses living in extreme environments, UVA says.

That includes the spindle or lemon-like shape of Sulfolobus monocaudavirus 1 (SMV1), the volcano virus, which has vexed virologists for almost two decades.

Infecting the microbes that share its brutal home, the virus turns them into SMV1 factories, expanding the host cells to up to 20x their normal size before ripping them apart and releasing the new viruses.

To discover what allows SMV1 to change shape, the researchers used cryo-electron microscopy, which allows for near-atomic levels of resolution. The virus’ method, published in Cell, hinges on its greasy proteins. A hydrophobic — water-hating — protein mixed into the virus’ outer membrane forms seven slippery protein strands.

The researchers believe that their results suggest that spindle and lemon-shaped viruses evolved from ancient, rod-shaped ancestors. Those narrow rod viruses could only fit so much genetic material inside them, so to fit more genes inside, the virus evolved greasy proteins that allow it to stretch and swell into a lemon shape.

“Our results show how helical assemblies can vary their diameters, becoming nearly spherical to package a larger genome and suggest how all spindle-shaped viruses have evolved from archaeal rod-like viruses,” the researchers wrote.

“What we have shown is that the protein that surrounds the genome in this virus is a clear membrane protein, but there are no membranes in the virus!” Egelman says.

The proteins’ strength means they could be useful for drug and vaccine delivery vehicles.

“This gives us new insights into how to potentially design systems for drug delivery or other purposes using similar proteins that will survive in the harshest environments imaginable,” Egelman says. 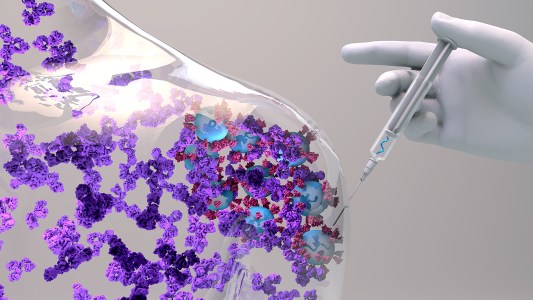 A new generation of preventative cancer vaccines for non-viral cancers are set to enter their first trials.

Medicine
These upcoming cancer vaccines may prevent tumors before they appear
Subscribe to Freethink for more great stories
Subscription Center
Sections
Video
Freethink
Subscribe
We focus on solutions: the smartest people, the biggest ideas, and the most ground breaking technology shaping our future.
Subscribe