Dr. Josiah Zayner believes we should all be able to practice gene editing with a CRISPR kit.

Watch on YouTube
Up Next
Now Playing
The cyborg artist who hears color
6:13 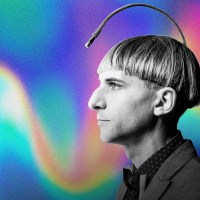 Now Playing
I got a chip implanted in a biohacking garage
7:05 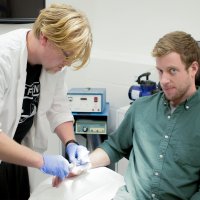 A mail-order CRISPR kit, manufactured by Dr. Josiah Zayner – leader in the global biohacking movement – is turning the scientific and medical communities upside down. Zayner’s do-it-yourself kits allow people to experiment with gene editing in the confines of their own homes.

Many critics argue that genetic engineering should be strictly left to the licensed and trained. However, Zayner believes the potentially life-altering effects of CRISPR technology far outweigh any adverse concerns.

What is CRISPR? The acronym stands for “Clustered Regularly Interspaced Short Palindromic Repeats.” It’s a gene editing technique that gives scientists the ability to go into the DNA of living organisms such as plants, animals, or even human beings, and replace or remove a small portion of that organism’s genetic coding.

Essentially any disease that has a genetic base can be cured using CRISPR. According to Labiotech.eu this includes Huntington’s disease, muscular dystrophy, cystic fibrosis, blindness, blood disorders, cancer, and even AIDS.

A human being’s biological makeup is a complicated labyrinth of precisely-purposed genomes and cells in which one improperly-placed or malfunctioning genome can have catastrophic consequences for the individual.

CRISPR technology allows the ability to cut DNA strands at precise points and correct sequencing in an effort to repair mutations in the DNA that cause disease. This makes it one of the most powerful scientific advancements, ever.

Dr. Jennifer Doudna is the co-discoverer of CRISPR, and while she clearly understands the extraordinary possibilities her discovery wields, she also expresses caution in how it is utilized. If used incorrectly, the technology actually has the potential for creating ecological catastrophe.

Instead of being used to cure a child’s blindness or eradicate cancer, what if CRISPR were used to create a militaristic, super-human race? As outlandish as it may sound, the potential for abuse and corruption is a very real threat.

Our understanding of this technology is still very elementary. While others see this fact as reason for caution, Dr. Josiah Zayner sees it as reason for expedited research, experimentation, and development.

Dr. Josiah Zayner, a biophysicist turned biohacker, worries that many in the scientific community are coddled, risk-averse, and therefore dragging their feet on realizing CRISPR’s potential.

Zayner learned about CRISPR while working as a biophysicist at NASA and engineering bacteria to help astronauts survive on Mars, but he felt the implementation of research and development was moving too slowly.

“Science is built on being elitist,” Zayner says. “The technology is so powerful, and there are literally millions of people dying that could use this technology, and yet nobody is giving these people access.”

Recognizing the life-altering potential of CRISPR, and the snail’s pace at which the scientific community was working to utilize it, Zayner decided to take the problem into his own hands by creating a do-it-yourself CRISPR kit.

The CRISPR kit that Zayner manufactures essentially allows individuals to experiment with biohacking and gene editing at home. Zayner’s hope is to democratize CRISPR, making it accessible to everyone, rather than limit its access to the rich and powerful.

He believes that opening up access to this technology can completely change the construct of society and the balance of power.

To those concerned about a CRISPR kit getting into the wrong hands and being used for ill purposes, Zayner pushes back. He believes that we cannot allow this groundbreaking technology to be left unactualized for fear of it being misused.

CRISPR kits can be used to remove malaria from mosquitoes, grow disease-resistant crops, and edit human DNA to eradicate cancer, so Zayner believes that fear-filled concerns, while not unfounded, are misprioritized.

Last year, Zayner was under investigation by the Medical Board of California for practicing medicine without a license.

He was ultimately cleared of this charge, but his unorthodox approach to this technology continues to draw question and concern. A recent article in The Guardian discusses the conundrum of Zayner’s methods as they were portrayed in Netflix’s docuseries Unnatural Selection.

Zayner’s cavalier attitude and process have shaken the science world and raised the question of whether he truly is democratizing a life-saving technology or playing a dangerously life-threatening game of God.

The ramifications of changing an organism’s DNA affects not only it, but its entire ecosystem.

His antics really caused an uproar after he posted a video injecting himself with DNA that had been modified using CRISPR. Many are terrified of the potentially fatal consequences of untrained individuals using his DIY kits for genetic engineering in humans.

Even more concerning for some is the greater ecological impact that this experimentation can have. The ramifications of changing an organism’s DNA affects not only it, but its entire ecosystem. When you genetically engineer mosquitoes, you impact all connected organisms as well.

Should We Be Playing God?

This technology isn’t going anywhere and, while acknowledging concerns about the dangers of Zayner’s mass-distribution of CRISPR technology, it is important that we strive to better understand it.

CRISPR functions as a molecular scalpel that can cure disease and even regenerate hearts, limbs, and any other organ in our bodies. Waiting for donors could become a thing of the past. Cancer could be cured and blindness could be fixed.

But, just as genetically-engineering mosquitoes could have disastrous and unforeseen collateral effects, what might these irreversible changes to humans’ ecosystem create?

Josiah Zayner does not believe that a CRISPR kit can become an unimpaired cure-all to humanity’s problems. He does, however, believe that CRISPR is a nearly untapped resource that belongs in the hands of the public. While science moves slow, Zayner hopes that by democratizing CRISPR, society will not have to wait any longer to reap its benefits.

For more from our series on biohackers, subscribe to Freethink.

Christopher Lewis Dawkins was mistakenly omitted from the video credits. Dawkins is the Cinematographer for the story.