It’s been more than 150 years since the Confederacy lost the Civil War, but reminders of the Confederacy — and its racist ideology — are still prevalent throughout the United States.

In addition to the countless public buildings, schools, parks, libraries, and streets named after people who fought for the slave states, more than 700 Confederate monuments and statues are on display in public spaces.

“There has been a consistent drive, primarily in the South, to remove these monuments,” Lecia Brook of the Southern Poverty Law Center told the New York Times. “They are a constant reminder of the dehumanization of African-Americans and the pushback against our civil and human rights.”

The ongoing George Floyd protests have kicked that drive into the next gear, and now, officials in several cities are doing what many believe they should have done a long time ago: removing Confederate monuments from public land.

In 1905, Birmingham unveiled the Confederate Soldiers & Sailors Monument — a 52-foot tall sandstone obelisk — at an entrance to what’s now known as Linn Park (notably named after Charles Linn, an officer in the Confederate Navy).

It’s important that we take this down and move forward.

On May 31, people protesting the death of George Floyd vandalized the Confederate monument’s base and attempted — unsuccessfully — to topple it. The next day, Birmingham Mayor Randall Woodfin addressed the crowd from the site of the obelisk.

“Allow me to finish the job for you,” he said, and by the morning of June 3, city workers had removed the entire monument.

“We don’t have time to worry about something that’s not working for our city and relegates black people to property and slavery,” Woodfin told The Today Show. “It’s important that we take this down and move forward.”

Virginia has more Confederate monuments in public spaces than any other state, in part because state law did not allow local governments to remove such monuments until this year. One of its most notorious, in Alexandria, features a Confederate soldier standing with his back to the north.

The statue was slated for removal in July, but in response to the George Floyd protests, its owner, the United Daughters of the Confederacy, asked the city to take it down on June 2.

The group hasn’t said what it plans to do with the removed statue, but Alexandria Mayor Justin Wilson appears content to know it’ll no longer be on display on city property.

“For a portion of our population, this statue was a symbol of an entire subjugation of a people,” Wilson told the Washington Post. “We still have a lot of work to do to ensure all of Alexandria’s history is told.”

In 1966 — nearly a full century after the end of the Civil War — a bust of Confederate General Robert E. Lee was given a place of prominence in downtown Fort Myers, Florida.

After George Floyd protestors surrounded the bust on June 1, the Sons of Confederate Veterans had it temporarily removed, telling WINK News that they planned to put it back up “when it’s safe.”

“The psychology of Robert E. Lee and what he stood for is undeniable,” Muwakkil said. “Robert E. Lee isn’t separate from what we’re seeing throughout the country and what has happened here. It should never come back.”

Confederate Monuments on the Way Down

Several other cities are taking steps to remove Confederate monuments in response to the George Floyd protests.

In Georgia, Athens-Clarke Mayor Kelly Girtz and several country commissioners have called for the removal of a Confederate memorial that’s already been the target of vandalism.

“We want it gone and gone quickly,” Girtz said during a community update meeting on June 3.

It’s something that memorializes murder to me and to people who look like me.

A senior official in Virginia Governor Ralph Northam’s administration told the Associated Press that Northam will announce plans on June 4 to remove an iconic Robert E. Lee statue currently on display in Richmond.

In Rocky Mount, North Carolina, meanwhile, the city council voted 6 to 1 on June 2 to remove a Confederate monument in Battle Park that served as a focal point for the city’s George Floyd protests.

Mayor Sandy Roberson told ABC11 News that the city council will confirm the vote next week, and then have the statue removed and stored somewhere. 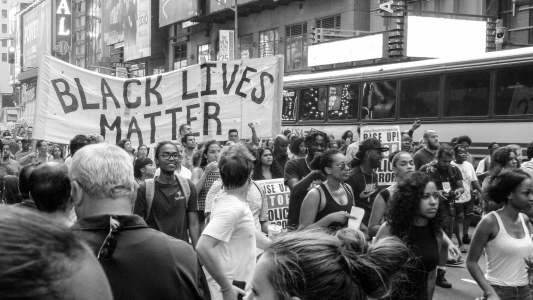 The George Floyd protests remained largely peaceful in these cities, with protestors and law enforcement occasionally even standing shoulder to shoulder.

Fixing Justice
Where the George Floyd protests (and responses) have been peaceful
Subscribe to Freethink for more great stories
Subscription Center
Challenges
Video
Freethink
Subscribe
We focus on solutions: the smartest people, the biggest ideas, and the most ground breaking technology shaping our future.
Subscribe