There are around 160,000 ventilators available for patients in the U.S. right now. In normal times, this would be more than enough for operating rooms and ICUs across the country.

However, these aren’t normal times. According to the American Hospital Association, as many as 960,000 patients with severe cases of COVID-19 will need a ventilator in order to breathe over the course of the pandemic.

To ramp up the supply of coronavirus ventilators, manufacturers of all types — particularly auto manufacturers like Tesla, GM, and Ford — are redirecting their manufacturing expertise to produce these life-saving machines.

But what does it take for a company that traditionally mass produces cars to suddenly turn around and make medical devices?

From F-150s to Coronavirus Ventilators

Ford, with help from GE and the United Auto Workers, has announced some ambitious plans.

But there’s a new challenge here. Ford isn’t making traditional ventilators. They’re making ventilators specific to the needs of COVID-19. The devices have to be quick to produce, cheap, and portable, so that they can be rushed to field hospitals if standard hospitals overflow. At the same time, they also have to pass FDA approval, which takes time, even if the approval process has been relaxed to help with production speed.

With those considerations in mind, Ford decided that the Model A-E ventilator, designed by GE and Airon, was the way to go. Compared to other ventilators, this model is lighter and smaller, doesn’t need a battery backup, and can function without electricity because it operates on air pressure alone. Since it’s designed for patients being transported in aircraft and ambulances, it’s optimized for use outside normal hospital settings.

Repurposing Manufacturing Equipment for a Cause

One of the biggest benefits of being a large auto manufacturer is that Ford can repurpose some of their manufacturing equipment into their new processes for ventilator production.

Adrian Price, Director of Global Core Engineering for Ford’s manufacturing team, notes that developing new processes early will ensure that they meet high-quality medical standards by the time those ventilators are shipped out.

While sheer scale and size means that Ford has the luxury of repurposing equipment in their plants, they still have to consider where they’re going to source their raw materials. This would be a challenge under any circumstances, but it’s especially difficult now that COVID-19 has disrupted global supply chains across countless industries.

To help open up the bottlenecks in supply chains, Ford has 3D scanned the Model A-E so they can break it down into all its component parts. They then turn to their purchasing and logistics teams to source those components at scale or, if they can’t buy them, they’ll replicate those parts themselves in their facility.

Once completed, Ford will ship the coronavirus ventilators to FEMA, who will then use their own distribution network to deliver devices to hot spots across the nation.

With cities across the country on lockdown, who’s putting these devices together?

Thanks to help from the United Auto Workers union and a squadron of paid volunteers, Ford will have the manpower necessary to assemble coronavirus ventilators at their production facilities in Michigan. While they started with less than a dozen people, the aim is to ultimately employ upwards of 500 people assembling the machines.

“This kind of thing is really in the DNA of Ford Motor Company,” says Price, who notes that when the country is in need, Ford has a history of stepping up.

Ford will ship the ventilators to FEMA, who will use their own distribution network to deliver devices across the nation.

In the early 20th century, Ford made incubators for premature babies, and in the ’40s, it even made iron lungs during a polio epidemic. Both pieces of equipment were expensive, with not nearly enough supply for the people who needed them — but the company managed to produce the devices for a fraction of their usual cost.

That dedication to service in times of national crisis, according to Price, is a driving factor that leads people in the company to show up for essential work now, just as they did then.

*Editor’s Note: Ford is a sponsor of an upcoming Freethink series but had no input into this article* 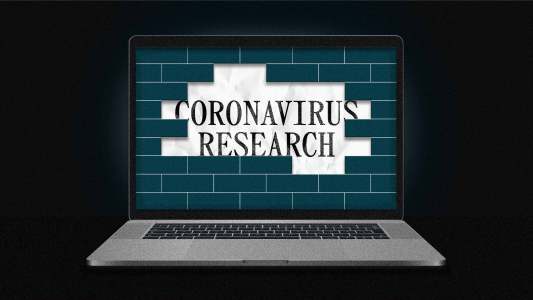 Potentially life-saving medical research is often hidden behind expensive paywalls, limiting access for those in the developing world. So one modern-day Robin Hood illegally downloaded and shared over 5,000 coronavirus research papers on Reddit.