Lexi Dade was “not much of an outdoors person.” As a native of Washington, D.C., she is a city girl, through and through. But the first time Dade went hiking in Rock Creek Park, she was hooked. She is now a regular in the outdoor adventure world.

The inspiration for giving it a try was Soul Trak, a local non-profit that connects people of color to outdoor spaces by hosting group outings. It turns out, the outdoor recreation industry has a diversity problem, and organizations, like Soul Trak, are trying to change that.

“Soul Trak is a community space where people like me, who look like me, are comfortable getting out there and doing things,” Dade says.

The Outdoor Industry Association reports that nearly three-quarters of Americans participating in outdoor recreation were white. The striking lack of diversity in the outdoors has become known by activists as the “adventure gap.“

Organizations like Soul Trak, as well as Color Outside, Brown People Camping, and Outdoor Asian, are trying to close that gap. They are promoting diversity in the outdoors through social media or group activities.

Organizations like Soul Trak, as well as Color Outside, Brown People Camping, and Outdoor Asian, are trying to close that gap. They are promoting diversity in the outdoors through social media or group activities.

Soul Trak was started by Tyrhee Moore in 2018. Raised in the city by a single mom, in a household of five kids, Moore had very little. He shared a bedroom until he was 18, when he left the nest. Despite this, he feels lucky to have had outdoor opportunities as a kid. When he was 12, he earned a scholarship to attend City Kids Wilderness Project, a summer camp in Jackson Hole, Wyoming — an opportunity he thought most kids like him couldn’t afford or weren’t aware of.

Looking back on his experience at City Kids, Moore saw a distinct pattern: there were fewer black kids in the older grades attending the camp. He attributes this pattern to societal pressures that push kids toward other interests.

“You’re constantly questioned about keeping your blackness. Society has really confined the black body in terms of what we’re capable of and what we should be doing,” Moore says. “Whenever there is someone that does something that doesn’t align with traditional sports, like basketball or football, we’re always pressured about who we are.”

He hopes Soul Trak will shift the cultural norm by making the outdoors open to people of all colors, at all ages.

At 16, Moore earned a scholarship for a 30-day backpacking course in Alaska through the National Outdoor Leadership School (NOLS). He was the only black student on the course, and because of the isolation and pressure he felt, he says he lagged behind.

“I was frequently explaining who I was in a way that felt very unnatural, just even down to why I listen to certain music or why I say certain things a particular way,” he says.

Despite the challenges of hiking on a white man’s trail, Moore stayed with NOLS as an intern for two years. But he never really felt at home in the outdoors until 2013, when he was selected to join Expedition Denali, a team of African Americans who set out to hike Denali (formerly known as Mount McKinley), the highest peak in America. It was that expedition that changed his perspective.

For the first time, he felt at home in the wilderness. He says the team had a family type environment — one where he didn’t feel the need to explain himself or represent his black community. Moore began to understand the reasons behind the lack of diversity in the outdoors. He recognized what made many people shy away from the outdoor adventure world. So, he decided he wanted to provide a similar wilderness experience that he had on Denali to other African Americans.

“Just understanding how important community was in that given moment was really powerful. I do not know if I could have made it up a mountain that difficult without the support and that type of loving environment,” he says.

Now Moore is building such a community through Soul Trak. The programs are open to anyone, with one caveat — they understand and are willing to support the values of the organization.

Not long after Lexi Dade’s first hike with Soul Trak, she headed out on a weekend rock-climbing trip. Dade is afraid of heights. She wasn’t sure how she would fare on the Virginia granite.

As Dade climbed the rock, she quietly told herself to rely on her leg strength more than her arms, so she wouldn’t get too tired — a technique Moore taught her in the climbing gym. Dade made it to the top of the climb, but descending proved to be an even bigger challenge.

On the way down, she froze. “Someone is going to have to call a helicopter,” she thought. But the Soul Trak family cheered her on from below, giving her the courage to finish the route.

“There are a lot of firsts with Soul Trak. I don’t think I would have done it if it weren’t for (them),” she says.

Dade’s next “first” will be sleeping outdoors. She says that camping is “very outdoorsy” for her, but, thanks to Soul Trak, she will definitely give it a try.

Clean Energy
Tapping into the million-year energy source below our feet
Quaise Energy wants to repurpose coal and gas plants into deep geothermal wells by using X-rays to melt rock. 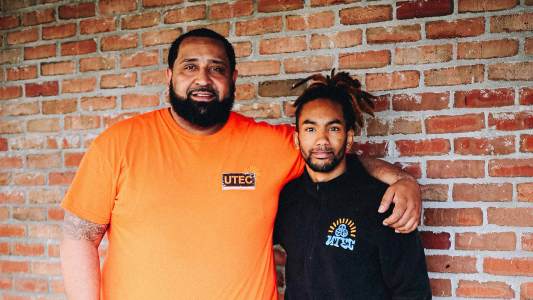 Carlos felt addicted to the thrill of crime at a young age. Today, he yields a different, positive influence on the streets with UTEC.

Building Community
Can friendship keep at-risk youth off the streets?
Subscribe to Freethink for more great stories
Subscription Center
Challenges
Video
Freethink
Subscribe
We focus on solutions: the smartest people, the biggest ideas, and the most ground breaking technology shaping our future.
Subscribe