Carlos remembers the first time he got in trouble with the police. He had just finished watching a movie, and when he came out of the theatre, he spotted a purse in a car.

“For some reason, I wanted it, so I went and got something and smashed the window. I snatched the purse and ran. The police and one of the security guys chased me across the parking lot. I ran across the projects, and by the time I made it to the other side, I got arrested. I was 10 years old.”

That was the first in a string of increasingly serious run-ins with the law for Carlos Colazzo.

“I (sold) drugs, and I started to feel a love for guns. I felt like I was addicted to robbing people. I was genuinely addicted to the rush. It was the wildest, most craziest thing that a person could ever do in life. And those were the limits I would push,” he says.

Twenty years later, Carlos continues to push the limits, but his goal is no longer money or drugs — it’s to be a positive influence on the streets with UTEC, an organization that is helping young people overcome poverty, gang involvement, and unemployment.

“He Kept Me Smart”

“I was a big boy,” laughs Carlos, recalling how he towered over his classmates at 5’11” and 250 pounds. His size, however, wasn’t the only dominating thing about him: Carlos was a leader. When he spoke, his classmates listened.

At 16, however, he wasn’t leading a sports team or running for student government. He was running the streets in his hometown of Lawrence, Massachusetts.

Gang violence and street life started ramping up in Lawrence, a small town north of Boston, in the mid-90’s. Turf wars were becoming a staple of the culture. “If you were from one side of town, and you got caught on the other side of town, there were problems,” recalls Carlos. Friends he would play ball with one summer were shooting at him the next summer.

The high-adrenaline excitement of street life appealed to Carlos. “I got adopted to the gang culture. By the age of 16, before I graduated out of eighth grade, my son’s mom was pregnant.”

And then the excitement came to a sudden halt: at 18 he was sentenced to 15 years behind bars for the armed robbery of a drug dealer.

Inside prison, however, a man named Rico would change his perspective.

Rico was serving 17 years for selling drugs. But ten years Carlos’ senior, Rico was so much more than just a fellow inmate or former dealer: he became a friend and a big brother.

“He kept me on my toes, kept me smart, played chess with me consistently just to keep me active and away from the negativity,” says Carlos. “And that changed me as a person. He was that person who would be there for me.”

With Rico’s support and encouragement, Carlos developed a love for learning and went on to earn several certifications, as well as his GED, while he was in prison. He knew that he had to develop new skills if he was going to have a future outside.

“We’re in the Line of Prevention”

Carlos was released from prison after serving 15 years. And he immediately wanted to hit the streets again.

This time, though, he wanted to do it as a positive mentor to the youth in his community. At 33-years-old he had learned a lifetime of lessons behind bars — and he knew he couldn’t keep those lessons to himself. He wanted to help young people avoid the mistakes and pain that street life had brought him.

Carlos wanted to be a street worker.

Across the nation, social programs often deploy “street workers” to mentor youth at risk of engaging in gang-related activities. Street workers nurture relationships with these young people and help them build constructive and healthy lifestyles. Many street workers, like Carlos, were involved in crime as a young adult. They are able to use their personal experience to establish credibility with the young people they are trying to steer into healthier lifestyles.

Carlos eventually teamed up with UTEC, a Lowell, Massachusetts-based organization that uses street workers to support local at-risk youth.For Carlos, working with UTEC was his opportunity to be someone’s Rico.

“As a youth worker, we’re in the line of prevention. So we’re hitting neighborhoods, schools, we’re getting referrals from probation, police, meeting community partners. We’re out in the streets looking in hotspots, homeless areas, places like that, for troubled youth,” says Carlos.

Street workers often look for the “10% that are doing 90%” of the gang activities. Reaching those high-profile gang members often has a trickle-down effect: they have the influence to help their peers turn their lives around, too.

These days, Carlos wakes up at 6 a.m. and makes his rounds covering Lowell, Lawrence, and Haverhill, three communities in northern Massachusetts. These communities have over 25 active gangs, and Carlos and his team are essential to preventing young people from getting sucked into the violence and drugs they see in their neighborhoods.

According to Carlos, the key to prevention is “a relationship with every single one — a friendship.”

If he’s a gang-banger, and he’s hard-core on the streets, I can talk the same lingo and tell him ‘brother, been there, done that.’

Friendship sounds straightforward, but many of these young people have experienced so much trauma in their lives that it can be hard to earn their trust. A street worker can’t just “shoot some mumbo jumbo” at the youth, says Carlos, because they’ll see right through the fakeness. Street workers must establish credibility upfront.

Carlos and his team are uniquely positioned to establish credibility with the young people they meet because they were those young people at one time. “If he’s a gang-banger, and he’s hard-core on the streets, I can talk the same lingo and tell him ‘brother, been there, done that.'” Establishing that credibility allows Carlos to swap street stories — and give advice — to the youth he meets.

“I educate my brothers, especially on the streets. When they’re out here playing with guns and doing things like that, I let them know what the law’s like,” says Carlos, adding that many of these young people have no idea what kind of legal ramifications their actions may incur.

But Carlos doesn’t just rely on his own previous street experience to establish credibility. He builds credibility by being genuine — he cares for these kids and he demonstrates it by consistently showing up for them when they need him the most.

“(Being) genuine is being truthful and transparent,” says Carlos, adding that a street worker has to stick to their promises. A lot of people say “no problem, I got you. I’ll take care of that in no time,” but in reality, they’re just blowing smoke.

Carlos has seen first-hand how genuine relationships can change a young person’s course in life.

Several years ago, he met a 15-year-old boy who already had multiple run-ins with the law. “I was working really hard with this one young adult, and he would not budge. He wouldn’t open that line of communication.”

That smile signaled an opportunity for friendship — and Carlos went on to provide him with a plan to get his life straight. This plan included legal advice, a new job, a place to live, and a mentor — Carlos — who provided accountability and helped him work through his anger in a healthy way.

Today that young man is 23-years-old with a high-paying job, healthy relationships with his family, and a new baby boy.

“If you say something, you want to follow up…because it shows that you care. What you’re doing is a lot louder than what you’re saying.”

UTEC street workers take this actions-speak-louder mantra to heart by taking care of the youth’s needs. If a young person can’t meet up with a UTEC worker because they don’t have a car or daycare arranged from their children, someone from UTEC will pick them up and arrange childcare. If the young person is struggling financially, UTEC can help them get the funds they need.

“Those windows of opportunity are huge for you to build the relationship.” This often allows for a deeper connection with the youth who are then more willing to participate in UTEC’s personal and job development programs that can help them overcome their struggles — since last October, about 167 young people have participated in UTEC. And these programs are proving to be effective: only 12% of UTEC participants are re-arraigned within a year after their release from jail, which is significantly lower than the 52% of young adults that are re-arraigned in the general Massachusetts population.

Breaking barriers, though, can be emotionally exhausting work for street workers. Practicing self-care is essential to the success of most relationships. But for street workers, this importance is amplified by the struggles they witness every day.

Street workers absorb everything like a “sponge,” Carlos says, and they can’t forget to “rinse off.”

“You’ve got to have the mind right in order to get through your days because you go from an intense day full of crises and everything else, to, ‘All right, I’m leaving everything at the door, I’ve got to walk in, I’ve got a family inside.'” In order to have the right mindset, street workers have to use their off-time to focus on their own well-being — such as meditating and exercise — and their families.

For Carlos, rinsing off helps him be effective with the young adults he meets on the streets — it gives him the endurance to stay genuine and keep showing up for the youth. And he’s seeing the effect that UTEC street workers are having on the streets.

“You think of Lawrence right now and people say, ‘Oh there’s a lot of drugs out there, there’s a lot of stuff that’s just gang violence and everything else,'” says Carlos, adding “(but) I look at a community that’s uprising. We’re looking at more businesses in our community (and) trying to professionalize.”

The ability to relate and genuinely care is crucial — it’s how Rico was able to get through to the troubled young Carlos behind bars, and it’s how Carlos is able to establish so many meaningful friendships with the young people he meets today.

“I have relationships with young adults right now that I’ve had since I started doing street work. I have young adults that will have a baby, and before they call their parents, they’ll call me. It’s the craziest thing. Those are the small rewards.”

“I want to be that lightship for young adults and show them a different avenue.” 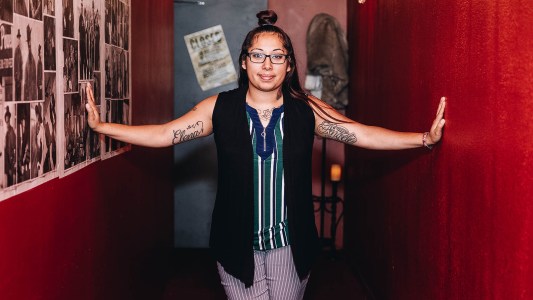 After suffering a violent gang beating, Desiree Maldonado experienced major medical and emotional issues. She turned from a shy and nerdy 14-year-old kid to a hard and angry rebel. This is how one restaurant job changed her trajectory.