To help Afghans escape the Taliban, people across the globe have donated millions of airline miles to a nonprofit that secures flights for refugees and asylum seekers — but until commercial flights resume in Kabul, their efforts stalled.

The challenge: Tens of thousands of people are desperate to leave Afghanistan, after the country fell to the Taliban, but the nation is land-locked, with just one international airport in Kabul, which makes travel difficult.

Miles4Migrants has collected more miles since the Taliban takeover than in the previous five years.

Some high-risk Afghan allies of the U.S. are being evacuated on military planes, but those flights are slated to end on August 31. Commercial flights, meanwhile, are currently halted.

The Taliban says flights will resume after the U.S. withdrawal is complete, but it’s unclear how many Afghans will be able to take advantage of them — the most recent commercial flights out of the nation were overbooked with high ticket prices.

Help Afghans escape: Miles4Migrants is a nonprofit that leverages partnerships with airlines, governments, and other groups to turn donated airline miles into flights for people fleeing their homes due to war, disaster, or persecution.

In the wake of the Taliban takeover, Miles4Migrants has seen a huge surge in donations, collecting 222 million miles in the week prior to August 27 — that’s more than it received in the previous five years combined (168 million).

Miles4Migrants doesn’t guarantee that the recent donations will help Afghans, specifically — just that they’ll be used to support its “most urgent flight requests, which includes assisting Afghan families.”

Grounded flights: The newly donated airline miles are enough to get 15,000 refugees to safety — but until the situation changes at Kabul’s airport, Miles4Migrants won’t be able to help Afghans flee the Taliban.

“We had been flying people out of Afghanistan right up until the airport was closed,” co-founder Seth Stanton told People on August 16.

For now, the nonprofit will continue to collect miles in the hopes it’ll be able to help Afghans again soon. Several websites are matching donations, so if you want your contribution to go further, consider using a link from one of those sites. 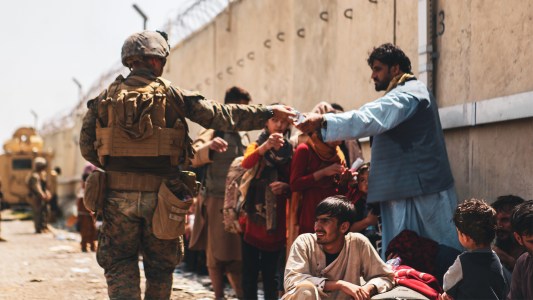 U.S. military vets are leading a “Digital Dunkirk” to help extract fellow citizens and Afghan allies from a Taliban-controlled Afghanistan.