With just days to go before the U.S. officially ends its presence in Afghanistan, American military veterans are volunteering to help extract our Afghan allies from the now-Taliban-controlled nation.

The situation: In 2001, the U.S. seized control of Afghanistan from the Taliban. It then spent two decades occupying the nation while trying to help establish an Afghan-led government and military.

The last U.S. troops (who control essentially a piece of Kabul airport) are expected to leave Afghanistan at the end of August, and Taliban forces have already regained control of nearly the entire country.

Now, tens of thousands of people are desperate to get out of Afghanistan, lest they be killed for helping the U.S. over the past 20 years.

Our Afghan allies: As of August 24, the U.S. government had evacuated more than 70,700 people from Afghanistan, including at least 4,000 U.S. citizens and their families. But it’s not clear how many more people still qualify for evacuation.

Thousands of people are desperate to leave Afghanistan, lest they be killed for helping the U.S.

Once identified, our Afghan allies then need to actually be evacuated, and that’s a huge challenge, given that Afghanistan is land-locked and Taliban checkpoints surround its only international airport.

“What it feels like is operating one of those arcade claw games from about 7,000 miles away,” U.S. military vet Kirk Johnson told Foreign Policy of the ally extraction process.

Digital Dunkirk: In 2007, Johnson founded a nonprofit called the List Project to help extract and resettle U.S. allies in Iraq, particularly translators, who were at risk of being killed.

The group is now attempting to do the same for America’s Afghan partners — and it’s not alone in the effort.

The Register: Allied Airlift 21 (AA21) is one of those groups. It was created by a network of West Point graduates, and while anyone can apply to volunteer, it prefers military vets who’ve held security clearances.

AA21 operates the Afghan Ally Register, an online database of people in need of extraction from Afghanistan. Some names are added by the individuals themselves, and others are added by people who know them.

AA21 volunteers vet the names and then guide people through the extraction process, connecting them with agencies that can help get them to safety.

Extending hope: It’s not clear how much the U.S. will be able to do after August 31 — the Taliban is insisting the U.S. stick to the deadline, while the U.S. administration has given mixed signals about a longer stay — so right now, AA21’s volunteers are racing against the clock

The volunteers guide Afghan allies through the extraction process, helping them get to safety.

One of them, U.S. military veteran Christina Tamayo, told Foreign Policy that she spends her days talking to officials in Washington D.C. and her nights communicating with assets on the ground in Afghanistan.

One of the hardest parts of the job, she said, was helping Americans and Afghan allies right outside Kabul airport stay positive while waiting to get through the airport gates manned by Taliban soldiers.

“It’s about hope. You must give them hope,” Tamayo said. “The longer that hope is an ember, it can grow into a fire.” 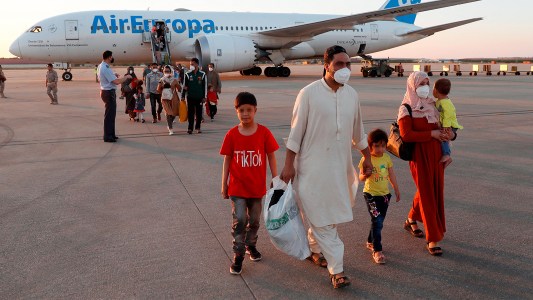