Dana Smith had just survived a heroin overdose when her parents walked into the hospital room.

Up until then, they had no idea their 18-year-old daughter was using heroin. “My family would have described me as having a lot of potential,” she says. “I was always in the gifted classes.”

But Dana craved adrenaline, not academics. She started skipping school — showing up only on test days to pass — and experimenting with drugs. Eventually, Dana dropped out of high school.

With her parents’ help, Dana attempted to get sober. And years later, in her mid-20s, she was finally hitting her stride. She was sober, had earned an associate’s degree, and started working at a gym.

But about 11 months in, manning the front desk got boring. And with no one to hang out with after work, she felt unfulfilled and isolated.

“Like, I got sober for this?” she recalls thinking.

So, she started using again.

Within a month she was back on the streets at age 25, supporting herself by shuttling drugs between Chicago’s projects and suburbs. In July 2009, driving under the influence of heroin and Xanax, Dana crossed the centerline.

She killed a motorcyclist. He left behind a wife and a teenage daughter that day.

‘I Had to Do Something to Change My Life’

Dana spent five years in prison for driving under the influence.

She remembers waking up in a ditch after the accident. “A lot of that day is just a fog,” she says.

In a prison cell, that mental fog lifted and she realized the consequences of her actions: “This is what I did. I took a person’s life.”

She decided that she could not leave that cell as the same person who entered it.

“I had to do something to change my life,” she says, “I had no idea how to do that. But I did know that sitting on a bunk all day wasn’t going to get me there.”

So, Dana started working out.

She did push-ups. She played 52-card pick-up, a game that involved tossing a deck of cards across the floor of her cell and doing a squat each time she picked up a card. She asked her parents to google “bodyweight CrossFit workouts” and mail them to her.

The benefits of getting in shape spilled into other areas of her life.

On top of that, fitness was a vehicle for community-building. A few prison mates joined Dana for CrossFit workouts. One woman became her running partner. In prison, she found a small group of women that would encourage and hold each other accountable to reach their goals for self-improvement.

However, this community was temporary. She knew as soon as she and her fitness partners were released they would scatter and part ways. The feeling of isolation contributed to her previous relapse — this time, she knew she needed a long-term supportive community to succeed in sobriety.

“I’m leaving this prison,” she recalls thinking, “What do I do for the rest of my life?”

Unlike Anything She Had Ever Seen

Then came a pivotal moment. Lying in her bunk watching CNN Heroes of 2012, Dana caught a glimpse of her future. The segment featured The Phoenix founder Scott Strode and showed footage of a class at their Denver headquarters.

The Phoenix is a non-profit that launched in Denver in 2006 as a fitness community to help people in recovery rebuild their lives. Since then, they’ve built communities nationwide, helping more than 30,000 individuals find hope in sobriety. The programs are free for those in recovery and those who choose to live sober — the only “membership fee” required is 48 hours of continuous sobriety before joining.

A key component of The Phoenix is community: beyond CrossFit, biking trips and a host of fitness classes, they offer a community of people who understand and support each other through inevitable struggles — and achievements — recovery often brings.  Fitness activities provide structure and discipline and, more importantly, an avenue to conversation and connection — something Dana desperately needed.

Not a Traditional Recovery Meeting

In 2016, fresh out of parole, Dana moved to Denver. She had to see The Phoenix for herself.

And as soon as she walked through The Phoenix’s steel doors, she was immediately accepted into the supportive fitness community. A staff member named Rourke — a tatted-up boxing instructor — greeted her in the lobby and listened as she sat on the couch pouring out her story.

It was “like this weight lifted,” she says. “I don’t even know what he said, it was probably something simple like ‘how are you?'” And since Rourke, like most staff at The Phoenix, was a peer in recovery, she knew her story wouldn’t shock him.

The only “membership fee” required is 48 hours of continuous sobriety before joining.

With trust established in the entry conversation, staff can connect individuals with The Phoenix community simply by inviting them to try a boxing class — or yoga, or powerlifting, or the next mountain biking or camping trip. Bonds form as people struggle and achieve together — in the workouts and outside of class  — on their road to recovery. Like many fitness communities, The Phoenix participants rally around each other, giving high-fives and pep talks to anyone who needs extra motivation to complete the workout. But unlike other fitness communities, the rally cries continue on a deeper level. By achieving fitness goals together, The Phoenix community is peeling off the shame, regret, and stigma that is so often associated with addiction. At The Phoenix, no one is labeled with stigmatizing language.

They are all athletes.

Learn more about The Phoenix and how you can support here.

The Sense of Community is Infectious — and Effective

The Phoenix community isn’t just for people in recovery — it’s a community for anyone who wants to help fight substance use disorder.

Every Monday morning, a group from Denver’s adult probation department comes to The Phoenix for a group fitness workout. Everyone shows up in gym clothes. No one wears a badge. Officers and clients are indistinguishable.

“We shed that traditional power and control,” says Scott Prendergast, manager of the probation program. The officer sees the client as a human being, a workout partner — not a case file or number. And clients see the probation officer not as a stoic figure sitting behind a desk, but as someone sweating and laughing and struggling to get through burpees together.

The percentage of clients who successfully complete probation has increased by 12% over the last two years. “One of the reasons, we believe, is the participation in weekly CrossFit classes at The Phoenix,” says Prendergast. Treatment centers and criminal justice agencies pay for these coached workouts because they want to connect their clients with a supportive community.

By achieving fitness goals together, The Phoenix community is peeling off the shame, regret, and stigma that is so often associated with addiction.

Since first walking through those doors in 2016, Dana has worked her way up from volunteer trainer to her current role as regional director. But The Phoenix didn’t just provide a career opportunity and a supportive network — it gave her a new sense of purpose: to be a positive impact in her community.

“My car accident wreaked such devastating havoc on my community…and it was the first time that I truly understood that my substance use disorder was affecting so many other people.”

She can’t undo the damage she caused in her hometown — but she can control her impact going forward. “The journey (at The Phoenix) gave me a sense of purpose…and a way to give back.”

Dana sees herself in many of the first-time Phoenix participants — often they are “just closer to the starting point” than she is. So she makes it a point to walk alongside them in their journey and give them encouragement and opportunities to grow.

Some people call that being a mentor. But not Dana.

“I wouldn’t identify most of my relationships as being a mentor/mentee sort of relationship. It’s more of a relationship of mutual benefit. I have a lot of incredible friendships. I call people through The Phoenix community when I’m struggling and they call me.”

One of those friends is Mike, the manager of the Denver chapter. He started as a volunteer instructor after Dana came to The Phoenix. At the time, he was in recovery and going back to school to get his bachelor’s degree, while working as a pedicab driver in the city. He didn’t think he was qualified to apply for a staff position at The Phoenix — but with a little encouragement and support from Dana, he did. Now he’s a leader in the community.

“Seeing someone come in and being able to walk alongside them from the time that they volunteered, like I did, and see them work through different positions at The Phoenix and be able to give back, it’s incredible,” says Dana.

The Phoenix is full of life-changing stories like Dana’s and Mike’s. That transformation is a team sport. “By no means do I ever want to stand on a stage or have stories written about how incredible I am,” Dana says, “because my story is not unique. I simply want to share that recovery is possible, and I couldn’t have done it without this community.”

Watch our full feature with The Phoenix: 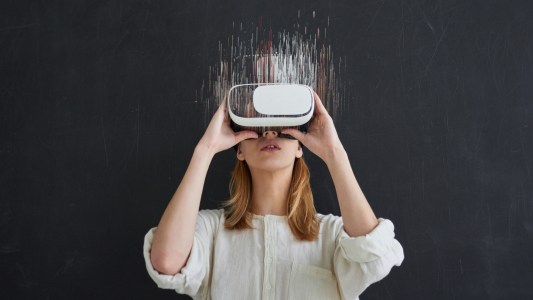 Whether a patient fears spiders or flying, VR technology allows therapists to treat anxiety disorders by simulating these experiences in a safe environment.