The White House has announced a pardon for those federally convicted of simple possession of marijuana — and the president is urging governors to do the same at the state level, which would have a far greater impact.

While a notable first step towards fulfilling campaign promises of cannabis decriminalization, the pardon does have some limitations. The majority of federal cannabis convictions do not apply to small, non-violent possession cases, Politico pointed out.

According to the New York Times, administration sources estimate the number of people pardoned at around 6,500 convicted between 1992 and 2021, as well as thousands more in Washington, DC, where the measure may be most impactful. (Since DC is not a state, it is under federal jurisdiction.)

The White House has announced a pardon for US citizens and lawful permanent residents federally convicted of simple possession of cannabis, and is urging the same at the state level.

The pardon also applies only to people who are US citizens or lawful permanent residents, excluding visitors and workers in the US on a visa, as well as undocumented immigrants.

“Sending people to prison for possessing marijuana has upended too many lives and incarcerated people for conduct that many states no longer prohibit,” President Biden said in a statement. “Criminal records for marijuana possession have also imposed needless barriers to employment, housing, and educational opportunities.”

The vast majority of those criminal records come at the state level, however, so the administration is urging governors to also pardon simple possession cases. Some states, like California and Illinois, have already begun the process of expunging these cases.

While most of those pardoned were likely no longer behind bars, the act is still one of the largest grants of clemency by a president in recent history, and the largest since President Jimmy Carter issued a blanket pardon to hundreds of thousands who evaded the draft during the Vietnam War.

While the pardon’s impact may be limited, old possession convictions are still a major albatross hung on Americans and the criminal justice system.

According to the ACLU, cannabis possession arrests accounted for 43% of all drug arrests in 2018, more than any other substance. People of color and lower-income communities are most impacted by these arrests, as the White House statement acknowledged.

In addition to the pardon and the leaning on states to do the same, the administration announced that it will ask Attorney General Merrick Garland and the Department of Health and Human Services (HHS) to revisit how cannabis is scheduled under US drug law. Currently, it is schedule 1, reserved for drugs with a high risk of abuse and “no currently accepted medical use.”

“This is the same schedule as for heroin and LSD, and even higher than the classification of fentanyl and methamphetamine – the drugs that are driving our overdose epidemic,” the president said.

Despite the pardon and legalization movement sweeping the states — 37  plus DC thus far, with 19 legalizing recreational use, and Arkansas, the Dakotas, Missouri, and Maryland voting on it these midterms, per Politico — the administration stated that regulations on importation, selling to minors, and trafficking should remain in place.

“Too many lives have been upended because of our failed approach to marijuana,” the president said. “It’s time that we right these wrongs.” 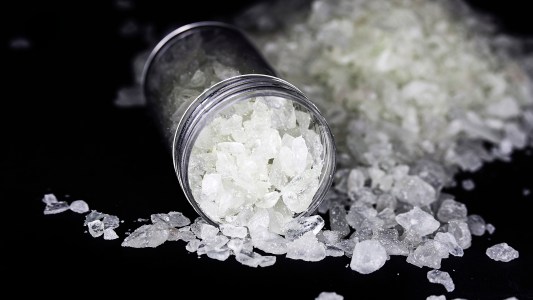 Drugs
Meth addiction treatments are finally on the horizon
Subscribe to Freethink for more great stories
Subscription Center
Sections
Video
Freethink
Subscribe
We focus on solutions: the smartest people, the biggest ideas, and the most ground breaking technology shaping our future.
Subscribe