When you think of hip-hop, culinary arts may not be the first association that comes to mind. But hip-hop is “all about the beef,” laughs Syreeta Gates, who explains that the two cultures actually have a lot in common.

“Hip-hop and food have always been intertwined,” says Gates, a social entrepreneur based in New York City. “Rappers rap about the food in their hometown, and it goes to show how your location inspires what you choose to eat and rap about, and what the limitations are depending on your neighborhood.”

Mainstream media has started to catch on to this connection in recent years, with shows like “Martha & Snoop’s Potluck Dinner Party” and rapper Action Bronson’s Viceland series “F*ck That’s Delicious,” but there hasn’t been a lot of resources for hip-hop fans who are interested in sharpening their own cooking skills.

Gates is on a mission to fill that void. Four years ago, she founded Yo Stay Hungry, a social enterprise designed to bridge the worlds of food and hip-hop through culinary competitions. “I just Googled ‘hip-hop and food,’ and all I found were lyrics,” she says. “The only thing that came up was a few articles that literally listed lyrics that rappers mentioned food in. But no food competitions.”

Yo Stay Hungry competitions are simple: teams of contestants prepare dishes mentioned in rap lyrics, coached by a professional chef mentor. The menus include meals like “T-bone steak, cheese eggs, and Welch’s grape” (from Notorious B.I.G. lyrics). Judges from the culinary and music industries then vote for their top pick.

Regardless of the outcome, each participant walks away from the event with valuable experience and connections in the culinary arts — as well as other creative industries, such as music, photography, and film. Through Yo Stay Hungry, Gates is able to give young people something more valuable than cooking skills: she’s giving them exposure to new experiences.

Freethink spoke with Gates about Yo Stay Hungry’s mission to inspire youth and influence hip-hop culture. This interview has been edited and condensed for clarity.

Freethink: Why is it so important to you that young people learn how to cook?

Gates: Cooking is definitely a skill. A lot of young people can’t cook anything more than cereal — we want to open up the world to them as far as what is possible to eat. We often work with young people who live in food deserts, so the only thing that’s around to eat might be at a corner store or a fast food restaurant.

And if that is the case, they might not have ever tasted fresh basil — so we partnered with North Brooklyn Farms this year, and we had an herb table at our competition. Some young people at our competition had never tried a fresh herb. They’ve never had to scale fresh snapper. They’ve never had to cut a T-bone steak. We want to expand their horizons.

Freethink: Yo Stay Hungry started in New York City with mostly youth participants. But now you’re holding competitions across the country, for people young and old. Why do you think this has really resonated with people?

Gates: One, I think our team really exudes passion when we’re putting on these events, and people can feel that. And two, this is really an intergenerational conversation. In our audiences, we have babies, and we have grandmas, and then, of course, we have Millennials. Young families come — instead of going to Chuck E. Cheese, they’ll come to Yo Stay Hungry.

People of all ages come together in the kitchen — which is kind of like how hip-hop brings whole generations together. We started out in high schools, and now we are launching our first adult competition this year. I think Yo Stay Hungry opens up a new dialogue around the culinary industry.

Freethink: How does the competition work?

Gates: Each team has four to six people — it could consist of young people, adults, grandmas, it doesn’t matter — and we partner each team with a chef coach. Then we give the teams a lyric, and they have two hours to cook. After the two hours, they deliver their food to the panel of judges, who are either in the music industry or in the culinary industry. They are judged on presentation, taste, and creativity.

Freethink: What do participants get from these competitions, besides new cooking skills?

We have participants that want to be professional chefs and make waves in the culinary arts field. But we’ve also had people that say, “Oh, cooking is not necessarily for me, but I see this person around here taking pictures of the food.” Maybe they pursue photography, or music — a lot of our judges come from the music industry. So no matter what, they can walk away with connections or a mentor in the creative industries.

Freethink: How do you help those who want to pursue culinary school?

Gates: Scholarships. We’ve given out a total of four scholarships, and we award them once a year. Culinary school is expensive, and we want to help in any way we can. One of our first scholarship winners was a high school student named Rebecca. She went on to culinary school, then she came back to be a coach chef, which was super amazing. We’ve been able to see it go full circle. If you’re really committed to culinary arts, this is how Yo Stay Hungry can help.

Freethink: What has made you so passionate about food and hip-hop?

Gates: I actually wanted to go to culinary school, however, I found that it’s super expensive. But I’ve always been passionate about food. My mother has ingredients that I used to cook with when I was younger, and I used to call her and say, “Hey mom, can you bring home some of that lemon pepper seasoning?”

And I’m really committed to pushing hip-hop culture forward, because I think every culture needs to be pushed. I don’t think Yo Stay Hungry could have existed 20 years ago. There was a point in time before hip-hop was called hip-hop. Society didn’t think it was going to stick. They thought it was a fad. But now hip-hop is popular culture. No one can deny that. And so I’m thinking about what’s missing in the culture, and thinking about what people are doing around hip-hop.

Part of moving the culture forward is by linking it to the past — it’s kind of like archiving, preservation. Biggie Smalls has been dead for about 20-something years. These young people aren’t listening to Biggie Smalls. They don’t have any need to listen to Biggie Smalls. But every time we do a competition, we give the toast, we spark a new interest. Every time we have a family come through, and the parent is saying, “Hey, this is what I used to listen to when I was your age.” It’s pushing the culture forward.

Freethink: The photos from the recent competition look amazing! What kind of food do the teams usually cook?

Gates: We’ve literally hit the whole gamut. A lot of our chefs have participated in big television culinary competitions. Our culinary lead, Airis Johnson, competed on “Chopped” — and she won. Their range of experience determines the type of food that they cook, and we end up getting everything you can possibly imagine.

Freethink: Where do you see Yo Stay Hungry going from here?

Gates: We have an annual Biggie Day culinary competition that’s held in honor of Biggie Smalls’ birthday in May. This is usually our biggest event. But we’re looking at ways we can expand and do more competitions that aren’t as involved as our Biggie Day. We’re looking to scale and take over more cities. We’re thinking about what it looks like for us if we went to 50 cities or did 50 competitions a year. 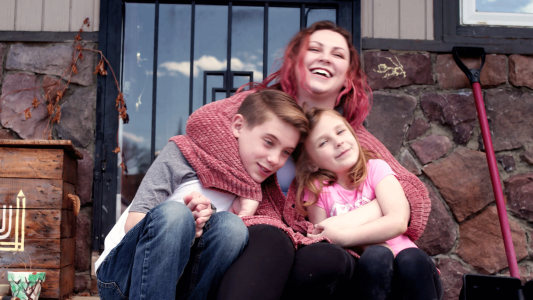 Hope House in Denver is changing lives for generations to come.