Homelessness was on the rise even before COVID-19 struck. In Europe, the number of people sleeping rough or living in temporary accommodation soared by 70% in a decade, according to a recent estimate.

The economic devastation caused by the pandemic has made a tough situation even worse. Extreme poverty spiked in 2020 as governments locked down their economies, according to the World Bank. With the outbreak still raging, and economic recovery uncertain in many countries, the outlook for tackling homelessness remains challenging.

How big is the problem? It’s been estimated that at least 150 million people — about 2% of the world’s population — are homeless. Yet the real number may be far higher because counting the homeless is extremely difficult. There’s no standard definition of what it means to be homeless. Governments often downplay the problem, and many homeless people are reluctant to come forward and be registered.

On the positive side, the push to build back better from the pandemic has brought homelessness into the spotlight. Governments, companies and charities are committed to addressing this issue, which the United Nations has called a “violation of human dignity.”

Here are some of the innovative solutions you’ll find around the globe.

A new University of Cambridge study looks at the impact of providing homeless people with modular mini-homes to call their own.

The researchers found that the project in Cambridge, UK, reduced drug and alcohol abuse and improved physical and mental health. The cost per house was just $50,000, roughly equivalent to public spending on one person sleeping rough for a year in the UK.

The stability and security tied to having your own home helped people get back on track after years on the streets. They were required to be clean and sober as a condition of residence, helping some overcome years of addiction. Some residents got training for new lines of work, while others returned to their old trades. Family ties were restored.

“There is a huge sense of wellbeing tied to simply having your own front door,” anthropologist and Cambridge co-author Dr Johannes Lenhard said when the report was released. “We can see the effect this has in the lifestyle changes of people who have previously struggled in hostels.”

Other communities around the world have turned to prefab micro-homes in a bid to reduce homelessness, such as the Alexandria Park Tiny Home Village in Los Angeles.

Another solution is using cutting-edge 3D-printing technology to produce low-cost homes. Projects are springing up around the world.

In India, Habitat for Humanity International has invested $411,000 in Tvasta Manufacturing Solutions Ltd. to boost the production of affordable 3D-printed homes. Construction using this technology is faster and generates less waste than traditional methods.

Tvasta is working with an Indian government programme that plans to build 20 million homes for low-income families across the country by 2022. Adithya Jain, Tvasta’s co-founder and chief executive officer, told Reuters a 3D-printed home can be customised and put up in just five days, making it well-suited to the government’s plans as well as for disaster resettlement.

The technology is also being put to the test in Africa, where many countries are struggling with a housing crisis. A company called 14Trees, with operations in Malawi and Kenya can build a 3D-printed house in just 12 hours at a cost of less than $10,000. This process also reduces CO2 emissions by as much as 70% compared with a typical house-building project.

The search for low-cost housing solutions led US firms NAC Architecture and Bernards to use shipping containers to build an apartment complex for the homeless in downtown Los Angeles.

The Hilda L Solis Care First Village, named after the head of the LA County Board of Supervisors, has 232 housing units and a common building with cooking, dining and laundry facilities.

Using the modular shipping containers meant the project could be completed in just six months in response to an urgent need for housing during the pandemic. The containers were stacked into three-storey structures, and made livable with the introduction of windows and insulation. Each comprises two living units of 12.5 square metres equipped with a bed, microwave, refrigerator, television and bathroom.

The facility, which opened in April 2021, cost $57 million to build, with most of that paid by the US government as part of its coronavirus response. 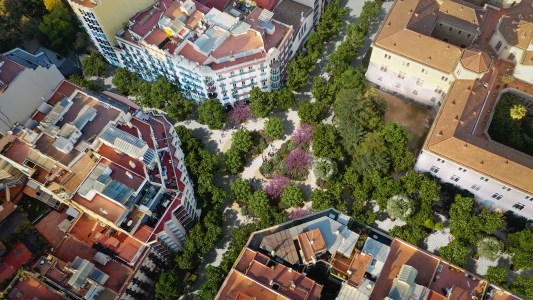 A new method for evaluating the potential for superblock transformations in different cities could increase their rollout across the globe.

Urban Living
Barcelona’s plan to “pedestrianize” its downtown could transform our cities
Subscribe to Freethink for more great stories
Subscription Center
Sections
Video
Freethink
Subscribe
We focus on solutions: the smartest people, the biggest ideas, and the most ground breaking technology shaping our future.
Subscribe