Jerral Hancock was sleeping on his mother’s floor, working at Wendy’s, and trying to figure out how to make a better life for his newborn son when he decided to enlist in the Army. Today, now with both a son and a daughter, he’s trying to answer that question under a very different set of circumstances: How can he be a good dad and husband after the bomb that exploded under his tank in 2007 left him paralyzed below the chest and with only one arm?

Jerral doesn’t have to answer that question alone. The Gary Sinise Foundation and Operation All The Way Home raised money to build Jerral and his family a specially designed “smart home” suitable for his wheelchair.

While the new accommodations couldn’t return Jerral’s arm, the Applied Physics Lab at Johns Hopkins University just might be able to. Earlier this year, the same team of neuro and robotics researchers that fitted Johnny Matheny with a state-of-the-art prosthetic arm flew to the Hancock home in Palmdale, California, to try an even bolder experiment: Could they make for Jerral, who’s dealing not just with an amputation but also a spinal cord injury, a prosthetic arm he can actually use? 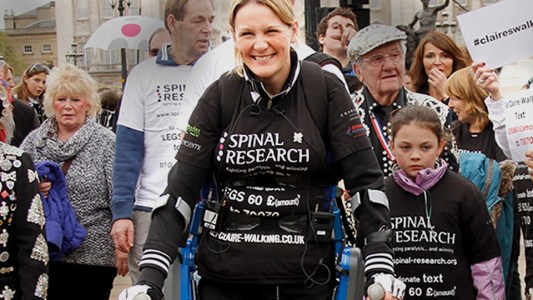 A paralyzed woman runs a half marathon in an exoskeleton, Sri Lanka defeats malaria, incomes are rising. Here’s…

Bionics
This week in ideas: Reasons to feel good about humanity
Subscribe to Freethink for more great stories
Subscription Center
Sections
Video
Freethink
Subscribe
We focus on solutions: the smartest people, the biggest ideas, and the most ground breaking technology shaping our future.
Subscribe