Kimberly Haven saw a woman wearing sanitary pads on her breasts. Being inmates in a Maryland state prison, women need to be creative, given the meager supplies they are provided. Haven’s fellow inmate wasn’t given any alternative for dealing with her lactating breasts, so she used pads from the commissary. She had been breastfeeding her baby since it was born a few weeks earlier.

When she entered the institution, however, the tools to express her milk weren’t available. Woman’s ability to produce breast milk relies on how often it is expressed, usually through breastfeeding. When the baby is absent, using a breast pump to extract milk is the next best thing to maintain milk flow.

Mothers in prison who aren’t provided breast pumps would soon meet the end of their milk supply. Even just a few days in prison is plenty of time to lose the ability to produce milk. Haven says she witnessed the same story time and again — prison destroys lactation.

“There is no support behind the fence,” she says. “There really should be somebody from the reproductive framework that is in those communities to be able to reach out to the woman and make sure she has the support — both the supply support, but also the emotional support — to be able to express her milk.”

Haven is the type of person who can’t walk away from a problem. She says doing so would be “giving it permission to continue,” and the grievances she experienced during her two prison stints were intolerable. So when she got out, she got to work. Already she has helped prisoners to regain their voting rights, felons to get jobs, and incarcerated women to get menstrual supplies. As the coalition and policy director for Reproductive Justice Inside, Haven is hoping to make prison life better for women’s health needs.

Even just a few days in prison is plenty of time to lose the ability to produce milk. Kimberly Haven says she witnessed the same story time and again — prison destroys lactation.

Last August, during Breastfeeding Awareness Month, Haven wanted to do what she could to support mothers in prison who choose to breastfeed. So she put the word out: she was collecting breast pumps and supplies for incarcerated women.

The response was overwhelming. Women started sharing the news with their networks — pinning posts to mommy groups and launching collection drives. Haven’s office in Baltimore looked like “breast pump central.”

“One of the greatest outcomes of that was that it got people thinking about incarcerated women in a much different, much more humanized light,” Haven says. Collecting the breast pumps was easy — actually getting them into the hands of mothers in prison is another story.

Momentum Toward Open and Accessible Breastfeeding

“I opened a big can of worms with this one,” she says. “Women have always been correctional afterthoughts. Being given the opportunity and space and the support to express your milk has never been on anybody’s radar, and it needs to be.”

The female rate of incarceration in the United States is near an all-time high. But Haven says the whole prison system is designed around men. So, she is launching a campaign to educate prison wardens (most of which are men), correctional officers, prison medical departments, and prisoners about the parental rights of incarcerated mothers and the health benefits of breastfeeding.

In the United States, a woman has a right to pump her breast milk, and various government policies explicitly support it. The Affordable Care Act requires that certain employers provide time and space for pumping. Some public buildings must accommodate visitors with a lactation room. And new health insurance plans are required to cover lactation support and supplies. But, like most rights, the right to breastfeed often is not afforded to mothers in prison.

The opportunity and space and the support to express your milk has never been on anybody’s radar, and it needs to be.

About 231,000 women are incarcerated in prisons and jails throughout the U.S., and an estimated 3% to 5% of them are pregnant at any given time, but no government agency keeps track. A Johns Hopkins Medicine study found that over 90% of the prison pregnancies end in live births. Still, there are few laws protecting mothers in prison, and no national standard for the care of pregnant women.

Lawmakers and advocates are responding to the growing support for open and accessible breastfeeding. In 2017, a court in New Mexico ruled that state correctional facilities must allow inmates to breastfeed during visits and pump milk while separate from their babies. And just last year, Illinois followed suit.

Breastfeeding in Prison is Good for Baby and Mom

The World Health Organization recommends breastfeeding. Even though a breast pump doesn’t provide the skin-to-skin contact recommended for newborns, moms and babies can still attain some benefits.

Babies to consume breast milk have a lower risk of diabetes and obesity. And breastmilk contains antibodies, which means they have longer passive immunity and lower infection rates. Recent studies found COVID-19 antibodies in breastmilk of mothers who were infected with the coronavirus. Breastfeeding mothers also have a lower risk of reproductive cancers, and they can benefit from the “oxytocin response,” which promotes bonding and an elevated mood.

If the campaign by Reproductive Justice Inside gets the buy-in Haven is hoping for, she still has to overcome logistical hurdles. How will she get the pumped milk from the prison to the baby? Anything coming in or out of a prison is a security risk. Plus, some mothers are imprisoned hours away from where their child is living, and not all caregivers have transportation or time to pick up the milk. Haven says she is working on it, and taking inspiration from other organizations who are attempting the same effort.

Organizations offering restorative health programs for mothers in prison are rare. While there isn’t an official count, the New Mexico Breastfeeding Task Force estimates there are between 10 and 20 lactation programs in U.S. jails. Illinois Birth Justice project provides trained doulas and parenting education programs, and The Minnesota Prison Doula Project facilitates face-to-face time between moms and children. A common sentiment between these programs is that a healthy mother-child relationship is beneficial to the child, mother, and society.

Colette Green, senior director of programs at Pennsylvania’s Maternity Care Coalition, says the biggest hurdle to overcome is establishing the logistics to run a lactation program and getting buy-in from the jail staff.

According to the CDC-Kaiser Permanente Adverse Childhood Experiences (ACE) Study, living with a formerly imprisoned household member is considered an “adverse childhood experience.” Such experiences faced during a person’s youth make them more likely to have multiple health risk factors in adulthood — including long-term health conditions, behavioral and mental health conditions (like depression or substance use), and even early death.

But programs like these are rare. Knight says that prisoners who deliver babies in a hospital won’t see the same level of dedication from staff.

“The assumption is ‘we’re just here to help her have a baby.’ That baby is going to be separated anyway,” she says, adding that even outside the prison, many new moms have a hard time accessing education and support to maintain breastfeeding.

For something so natural, one would think breastfeeding would be easy. But most women don’t breastfeed as long as they want to. Among the main reasons they stop early are issues with lactation and lack of support at work, in the hospital, or at home.

“There’s no education about the normalcy or what actually happens to nourish a baby from the human body, pretty much until a woman is pregnant,” Knight says. “And then when she’s pregnant, it’s like crunch time. You will be feeding a baby within months, and there’s a lot to know about it.”

Making it All Happen

Haven has been fighting this fight for two decades. In the last three years, with Reproductive Justice Inside, she has helped pass three pieces of Maryland legislation: a bill providing incarcerated women with access to menstrual hygiene products, and the first bill in the nation to prohibit placing pregnant women in involuntary solitary confinement — some women were placed there, separated from other inmates, “for their own safety,” which Haven balks at.

“Women create an amazing sense of community behind the fence,” she says. “We surround a pregnant woman, and we look out for her.”

The third bill requires that local jurisdictions in Maryland to have a policy related to pregnancy health care, which she found was uncommon. She drafted a model policy, which includes a mother’s opportunity to express milk for her baby and is currently working with wardens to institute it.

Women create an amazing sense of community behind the fence. We surround a pregnant woman, and we look out for her.

So far, Haven has given a handful of pumps to prison wardens who promised to distribute them to new moms. But because of the bureaucratic web, she doesn’t know what women received the supplies, if any.

“If we do things smarter if we do things through best practices, and we empower women to be in charge of her own body, her family planning, then not only is that good risk management for institutions in the States, but it also leads to good health outcomes,” Haven says. “And at the end of the day, that’s what everybody wants.” 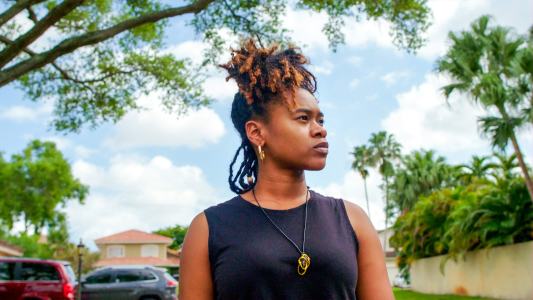 A national group called the Alliance for Safety and Justice has set out to rethink America’s criminal justice system, with a focus on healing rather than punishment.