The killing of George Floyd and subsequent police brutality protests have prompted officials across the U.S. to question the role law enforcement should play in society.

But Eugene, Oregon, asked itself that same question more than 30 years ago — and decided to make a major change in its approach to public safety.

In most U.S. cities, law enforcement officers respond to 911 calls, but not every emergency is best served by a person with a badge and a gun. In some cases, a police presence can even turn an otherwise peaceful situation violent.

That’s where CAHOOTS comes in.

Not every emergency is best served by a person with a badge and a gun.

CAHOOTS stands for “Crisis Assistance Helping Out On The Streets,” and it’s a mobile mental health clinic founded by White Bird Clinic, a nonprofit focused on helping underserved populations in Eugene.

CAHOOTS has served as a public safety partner for the Eugene Police Department since 1989.

If someone calls 911 or the police non-emergency line to report a crime or an act of violence in the city, dispatchers send police to deal with it — just like they always have.

But if a call focuses on something related to mental health, substance abuse, or homelessness, it’s routed to CAHOOTS.

CAHOOTS then deploys two people to deal with the call. One is a trained medic, usually an EMT or nurse, and the other is a crisis worker who’s undergone at least 500 hours of mental health training in such areas as conflict resolution and crisis counseling.

In 2015, CAHOOTS expanded its services to include the Springfield Police Department.

It now takes nearly 20% of the Eugene-Springfield area’s public safety calls and rarely encounters a situation it can’t handle — in 2019, the group summoned police back-up on just 150 of about 24,000 calls.

“(People) are calling for police because who else do you call, but clearly, it’d be more beneficial for CAHOOTS to show up,” he continued.

CAHOOTS manages to provide its service on a budget of just $2.1 million a year. For comparison, the budgets for the Eugene and Springfield Police Departments are $70 million and $20 million, respectively.

“There’s a strong argument to be made from a fiscally conservative perspective,” Tim Black, CAHOOTS’ operations coordinator, told the New York Times. “Public safety institutions generally have these massive budgets and there’s questions about what they are doing.”

If a 911 call is related to mental health, substance abuse, or homelessness, it’s routed to CAHOOTS.

Several cities now considering changes to their own police departments have reached out to CAHOOTS, but Black acknowledges that just because the program works for Eugene doesn’t mean it’ll work everywhere.

“What we do with those communities is going to be different; it really depends what each group needs,” he told KVAL. “We don’t think that CAHOOTS is a cookie-cutter program that you can just pick up from Eugene and plop into a big city like Houston and expect it to work the same.”

Still, Black is encouraged that so many places are now poised to challenge the status quo when it comes to policing — and he sees CAHOOTS as being proof that the challenge can pay off.

“We have a really great example of how communities can really evaluate what public safety means,” he said. 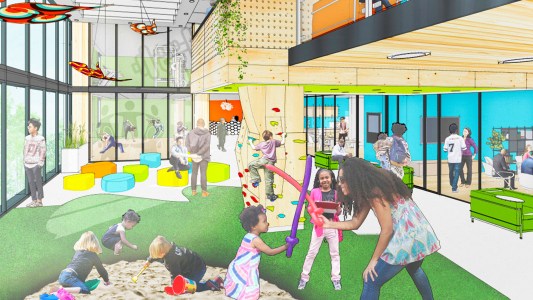 A decarceration project will see a 1,100-bed Atlanta jail transformed into a “Center for Equity” to serve the local community.

Fixing Justice
This Atlanta jail is being replaced with a "center for equity"
Subscribe to Freethink for more great stories
Subscription Center
Sections
Video
Freethink
Subscribe
We focus on solutions: the smartest people, the biggest ideas, and the most ground breaking technology shaping our future.
Subscribe