2020 was huge for space exploration, and based on what’s scheduled for 2021, we’re in for another year of breakthroughs, milestones, and general space badassery.

Here are some of the most exciting space missions planned for the next 12 months.

February is a big month for space missions to Mars.

The United Arab Emirates’ Hope orbiter is expected to reach the Martian atmosphere on February 9. That’ll be a huge milestone for the nation, marking its first successful deployment of a craft to explore deep space.

The very next day, China’s Tianwen-1 orbiter should reach the Red Planet. After spending a few months studying its atmosphere, the orbiter will send a rover-containing lander to Mars’ surface in May. If successful, that’ll be China’s first time landing a craft on another planet.

Those aren’t the only space missions targeting Mars in February, either — NASA’s own Perseverance rover is expected to reach the planet on February 18.

Perseverance will go right in for a landing, and once settled on the Martian surface, it’ll begin hunting for signs of ancient extraterrestrial life — something no other rover has attempted. During its time on Mars, it’ll also deploy a tiny solar-powered helicopter, marking the first attempt at controlled flight on another planet.

Mars won’t be the only hot spot for space missions this year — the moon is also going to get its share of attention.

In partnership with NASA, two private companies — Pittsburgh’s Astrobotic and Houston’s Intuitive Machines — will be sending landers to the moon in 2021.

Those landers will be carrying a total of 16 experiments and tech demos designed to help NASA prepare for upcoming crewed missions to the moon. If all goes well, the landers will be the first U.S. spacecraft to reach the lunar surface since 1972.

This year, NASA also plans to test out the Space Launch System rocket and Orion MPCV capsule it’s been developing for crewed moon missions. The current plan is for the launch to take place in November, but it has been delayed a half dozen times, so maybe just mark this one down in pencil.

The Best of the Rest

The moon and Mars are just two in an infinite number of celestial objects, and a few others will be the target of 2021 space missions.

On July 22, the launch window for NASA’s “Double Asteroid Redirection Test” or “DART” opens — and that first-of-its-kind mission will see NASA sending a spacecraft on a collision course with the binary asteroid Didymos.

Normally, NASA isn’t in the business of purposefully crashing into anything during its space missions, but if a large asteroid were to hit Earth, it could cause a tremendous amount of damage.

In anticipation of such a scenario, NASA wants to see if it could redirect an asteroid by slamming a spacecraft into it, so the agency is first testing this on an asteroid system that’s not a threat to our planet.

NASA isn’t just planning to destroy asteroids — in October, it aims to launch Lucy, a mission to study ancient asteroids around Jupiter.

Those asteroids are 4 billion years old — essentially time capsules from the time our solar system was born. However, no craft has ever studied them up-close before — the hope is that Lucy will be able to unlock some of their secrets.

That much-anticipated spacecraft is expected to provide an unprecedented look at some of the most distant objects in all of space and time — giving us a glimpse at what was happening just after the Big Bang and maybe even helping in the hunt for extraterrestrial life. 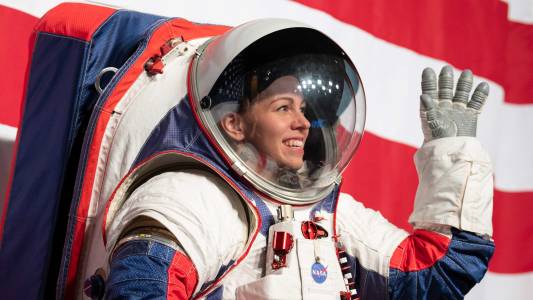 NASA is developing a next-generation spacesuit called the xEMU for upcoming missions to the moon and, eventually, crewed trips to Mars.