When Neil Armstrong walked on the moon in 1969, the only thing standing between him and almost certain death was his spacesuit — a single tear or faulty component in the garment could have left him with only seconds to live.

Aside from protecting Armstrong and his fellow Apollo-era astronauts from space radiation, extreme temperatures, and abrasive lunar dust, the garments also provided them with oxygen, water, and the ability to communicate with one another.

After a 50-year hiatus, NASA plans to begin sending people to the moon again in 2024 — and when those astronauts reach the lunar surface, they’ll be wearing a spacesuit designed to be safer and more useful than the one donned by their predecessors half a century ago.

NASA first unveiled this new moon-bound spacesuit — the eXploration Extravehicular Mobility Unit (xEMU) — in August 2019. The garment is still in development, but according to NASA, it’ll be ready for use by the time the Artemis program launches its first crewed mission to the moon.

When NASA sent the first astronauts to the moon, it really didn’t know what to expect, and that meant it had to make some educated guesses as to what a spacesuit needed to be able to do.

One thing it didn’t anticipate was the sharpness of the lunar soil — it’s composed of tiny, jagged shards that get everywhere, potentially contaminating vital components. To account for this, the new spacesuit was designed with fewer places that soil might be able to penetrate.

“It’s like a whole shirt and whole pants that’s all one piece, without breaks where dust can get inside,” Richard Rhodes, a NASA spacesuit engineer, told MIT Technology Review.

The xEMU also boasts an updated Portable Life Support System (PLSS). The PLSS looks like a backpack and is an absolutely vital part of a spacesuit — it provides oxygen and water, regulates the temperature and air pressure in the suit, and houses the communication system.

The PLSS in the new spacesuit contains duplicates of almost every component, meaning if one fails, there’s likely a backup ready to fill in — a huge safety boost made possible by the miniaturization of tech in recent years.

The xEMU isn’t just designed to be safer than its predecessors, either — it should also be more functional.

The suits worn by the Apollo-era moonwalkers were actually really hard to walk in. The astronauts had limited lower-body mobility and had to sort of shuffle along or hop from place to place, which required quite a bit of exertion.

If they wanted to grab something on the ground, they had to lunge for it — not ideal when the ground is covered in shard-like soil and you don’t want to tear your spacesuit.

Our main goal is that the crew doesn’t even think about us.

The xEMU is designed to allow astronauts to bend at the hips and knees, which should make moving less of a chore while also making it easier to study objects on the ground.

“You won’t see the bunny hopping and falls like those seen in the Apollo videos, because we’ve added bearings and new soft elements to help the suit move smoothly with the wearer,” Marshall Smith, director of NASA’s Human Lunar Exploration Program, explained.

Additionally, every moon-bound astronaut will undergo full-body, 3D scans while performing different actions so that NASA can custom-build a spacesuit that will give them the greatest range of motion and the most comfort.

“Our main goal is that the crew doesn’t even think about us,” Rhodes said. “They put the suit on, and they do their work — the science, the exploration — and do not even think twice about how mobile they are or how effectively they can work.”

“That’s a tall order, but we’re trying to get as close to that as possible,” he continued. “We want to be invisible.”

NASA has already tested out the xEMU in an underwater lab it uses to simulate spacewalks and plans to conduct future tests aboard the International Space Station before the crewed Artemis missions.

If all goes well, the plan is to then modify the suit for other missions, including the first crewed trips to Mars.

“Ultimately the goal is this: we’re going to Mars. And, in order to go to Mars, we have to use the moon as a proving ground,” NASA Administrator Jim Bridenstine said while unveiling the new spacesuit.

“We need to learn how to live and work (on) the surface of another world for long periods of time,” he continued, “and, in order to do that, friends, we need spacesuits.” 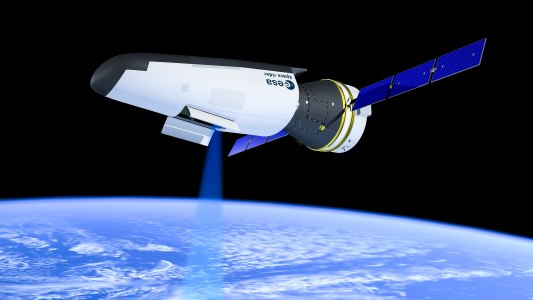 ESA is officially building Space Rider, a spaceplane designed to give scientists cheaper access to microgravity for their experiments.