NASA scientists have “remixed” the incredibly deep sounds emitted by a black hole 240 million light-years away, making it possible for humans to hear a black hole for the first time.

“​[It sounded like] a beautiful Hans Zimmer score with the moody level set at really high,” visualization scientist Kimberly Arcand, who led the sonification project, told the Washington Post of her first time listening to the audio.

Sound in space: When an object vibrates, it creates sound waves that travel through the air, water, or other medium around it. If there is no medium around the object, it can’t create sound — that’s why most things in the vacuum of space are silent.

Galaxy clusters are packed with hot gas, though, and in 2003, NASA astronomers spotted evidence of sound waves in the gas near the center of the Perseus galaxy cluster. They then determined that the sound was emanating from the cluster’s central black hole.

What’s new? NASA astronomers recently translated the black hole’s sound into notes, but the pitches were about 57 octaves below the human hearing range — to put that in perspective, the highest and lowest keys on a piano are separated by about 7 octaves.

By scaling up the notes by 57 and 58 octaves — playing them at frequencies 144 and 288 quadrillion times higher — Arcand’s team was able to represent the black hole’s sound in a way that humans can actually hear.

NASA then released their “remix” as part of its Black Hole Week celebration in May.

“It’s a superb representation of the science, in my opinion, and a rather haunting sound!” Carole Mundell, head of astrophysics at the University of Bath, told the Post.

Black hole fun: The 2003 discovery was the first time anyone had ever detected sound waves from a black hole, and since then, scientists have discovered that sound actually plays a role in the formation of galaxy clusters by controlling the rate of star growth.

The newly released audio clip has nothing to do with a recent scientific insight, though — NASA created the remix because its followers on Twitter wanted to know more about the sounds of space.

In addition to sharing the black hole clip, NASA has also “sonified” other types of astronomical data, representing the light from a supernova explosion, the presence of dark matter in a galaxy cluster, and more as audible sounds — giving the public a new way to experience space science. 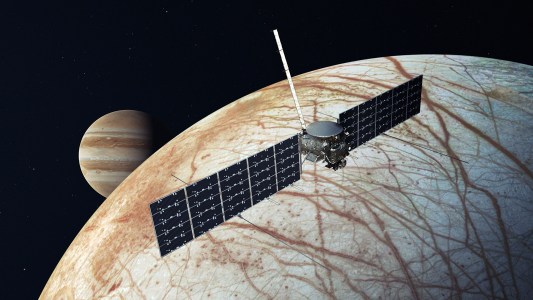 A study of “underwater snow” on Earth is informing NASA’s hunt for habitable locations on Jupiter’s icy moon Europa.

Astronomy
NASA thinks it may snow upside down on Europa
By Kristin Houser
Subscribe to Freethink for more great stories
Subscription Center
Sections
Video
Freethink
Subscribe
We focus on solutions: the smartest people, the biggest ideas, and the most ground breaking technology shaping our future.
Subscribe