NASA has awarded high-tech construction company ICON a nearly $60 million contract to develop Olympus, a 3D-printing system specifically designed for building on the moon and Mars.

The challenge: NASA’s Artemis 1 mission launched in November, putting the agency a major step closer to its goal: not just getting humans back to the moon, but establishing a long-term presence there so that astronauts have time to perform the research needed to reach Mars.

The cost of sending all the construction materials needed to build a significant moon base from Earth to the moon would be astronomical, so NASA’s plans for building on the moon depend on using as many local resources as possible.

What’s new? Now, NASA has awarded ICON, a Texas-based company specializing in advanced construction tech, a $57.2 million contract to develop Olympus, a 3D-printing system that could be used for building on the moon, and Mars, using local materials.

“[Olympus] will allow us to … build all the elements of infrastructure necessary for a lunar outpost and ultimately a moon base,” ICON CEO Jason Ballard told KVUE. “This is launch and landing pads, roadways, habitats, you name it — all the things we need on the moon.”

While the 3D printers ICON uses to construct houses on Earth utilize a water-based concrete “ink,” Olympus will take a different approach.

Space partners: This isn’t the first collaboration between NASA and ICON.

The agency has been helping fund the company’s plans for off-world construction since 2020, and in 2021, ICON unveiled Mars Dune Alpha, a 3D-printed facility at NASA’s Johnson Space Center that will be used for a year-long simulated Mars mission starting in 2023.

The new NASA contract runs through 2028, and during it, ICON will continue developing the Olympus system using actual samples of lunar regolith, brought back during NASA’s Apollo missions, as well as simulated moon dust.

ICON will also bring its hardware and software into space during a flight designed to simulate lunar gravity. Ballard told KVUE that the company hopes to be building on the moon by 2026, with the first structure likely to be a launch and landing pad.

“The final deliverable of this contract will be humanity’s first construction on another world,” he said, “and that is going to be a pretty special achievement.” 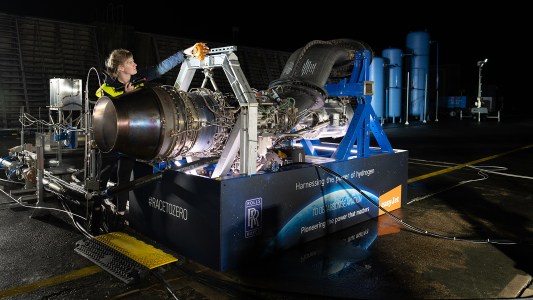 Rolls-Royce and easyJet have demonstrated for the first time that a modern plane engine can be safely powered by hydrogen fuel.