A modern plane engine has been powered by hydrogen fuel for the first time — putting the aviation industry a step closer to its goal of going green.

However, there is a straightforward way to decarbonize ground transportation: transition to electric vehicles, while decarbonizing the electric grid. We don’t have a comparable plan for aviation.

Aviation is responsible for 1.9% of the world’s greenhouse gas emissions.

The use of sustainable aviation fuel, made from biomass, can reduce an aircraft’s emissions by as much as 80%, but it doesn’t eliminate them. Today’s batteries, meanwhile, can power small planes on short flights, but they’re too heavy for large jets or longer trips.

We need to figure out some way to do better than that, though, as UN experts predict emissions from aviation could triple by 2050, due to the steady increase of passenger and freight air transport.

The idea: Hydrogen fuel is a promising alternative for the aviation industry. It provides much more power by weight than batteries, and unlike other jet fuels, it doesn’t produce any lasting greenhouse emissions when burned — the only byproduct is water.

If the fuel can be made to work with existing engines, it would also avoid the need to replace aircraft or engines to mitigate emissions.

What’s new? Now, British engineering firm Rolls-Royce and the airline easyJet have demonstrated for the first time that a modern plane engine can be safely powered by hydrogen fuel.

The companies’ ground test took place at the UK’s Boscombe Down military aircraft testing site, and the engine was a converted Rolls-Royce AE 2100-A turboprop, which is used to power regional aircraft.

If additional tests go well, the next step will be ground testing of hydrogen fuel in a Rolls-Royce Pearl 15 jet engine, designed for business jets, before moving on to flight tests.

The cold H2O: Hydrogen is abundant on Earth, but most of it is tied up with other elements, and the most common technique for producing pure hydrogen pulls it out of methane, releasing carbon dioxide in the process.

Alternatively, an electric current can be used to extract hydrogen from water, leaving behind only oxygen, but the process is expensive, and if the electricity is produced by fossil fuels, the climate benefits of the hydrogen fuel are minimized.

Looking ahead: The electricity used to create Rolls-Royce’s hydrogen fuel came from wind and tidal power, but “green hydrogen” like that is scarce. For green hydrogen to play a significant role in aviation, we’ll need to dramatically increase the supply.

Thankfully, while Rolls Royce works out the kinks of converting jet engines to run on hydrogen, others are looking for ways to scale up production, such as by using clean geothermal energy sourced from abandoned oil wells to power the process or by extracting hydrogen from saltwater at massive offshore wind farms. 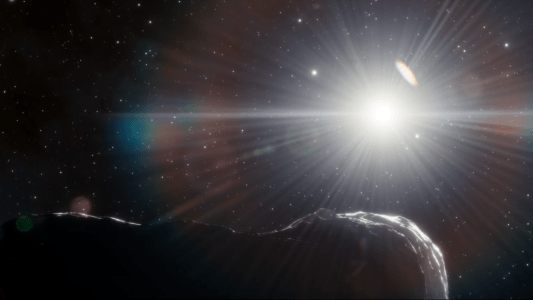 In a remarkable achievement, three new large asteroids have been found in the most elusive place: inside the orbit of Earth.

Outer Space
What the new Earth-threatening asteroid means for humanity
Subscribe to Freethink for more great stories
Subscription Center
Sections
Video
Freethink
Subscribe
We focus on solutions: the smartest people, the biggest ideas, and the most ground breaking technology shaping our future.
Subscribe