An aerospace startup, founded by a pro hockey player turned Harvard-educated engineer, expects to have its electric airplane certified for flight by 2024 — and Amazon, UPS, and the US military are already prepared to buy hundreds of the vehicles, which can takeoff and land vertically.

The challenge: The ships, planes, trains, and trucks we use to move billions of tons of cargo every year currently produce 8% of our global greenhouse gas emissions. By 2050, the freight industry’s emissions could double, as we rely more on online shopping and home delivery.

Road vehicles are by far the biggest offender, producing nearly two-thirds of the freight industry’s emissions. While transitioning to electric vehicles could help reduce its environmental impact, heavy road freight would still contribute to congestion and damage infrastructure.

The startup: Kyle Clark wants to take some of the cargo off the road and put it in the sky.

After short stints in the NHL and Finland’s professional hockey league, the Vermont native went to Harvard to earn a degree in materials science before starting a career in engineering in 2004.

Rothblatt had developed an interest in electric aircraft a few years prior — she wanted a green way to quickly transport organs between cities — and was intrigued when Clark told her he’d be able to have a vehicle ready for demo flights within a year or two.

The electric airplane: Beta’s first electric airplane prototype was indeed ready within eight months, but it was soon replaced by a more streamlined prototype, modeled after a small bird called the Arctic tern.

The electric airplane takes off and lands vertically, so it isn’t bound to airports or traditional runways — all it needs is somewhere relatively flat to land and charge its batteries, a process that Beta says takes about 50 minutes.

Beta’s goal is to have a network of 480 solar-powered charging stations across the US, and it’s already built 55 of them.

Looking ahead: While 1,400 pounds may sound like a lot of cargo, a nine-foot long U-Haul van can carry 4,000 pounds, so Beta’s deliveries will likely be for high-priority packages.

The company still faces the daunting task of getting its vehicle past regulators — the FAA has never certified an electric-powered aircraft for commercial use — but it believes the ALIA will be cleared for takeoff in 2024.

Beta will then be able to begin filling orders for the vehicle, which is expected to cost $4 million to $5 million. United Therapeutics is buying 60, and UPS is so far purchasing 10, with an option for 140 more.

In May 2021, the ALIA became the first crewed electric vehicle to receive airworthiness approval from the Air Force, and between that branch and the Army, Beta has another $43 million in military contracts to fill.

Amazon has also invested an undisclosed amount in Beta, so don’t be surprised if some future Prime purchases end up zipping across the sky in the company’s electric airplane. Whether that happens as soon as 2024, though, will be up to the FAA. 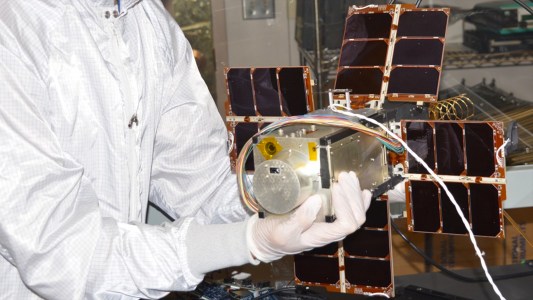 Aerospace
Unbelievably sensitive NACHOS satellite is ready to save lives
Subscribe to Freethink for more great stories
Subscription Center
Sections
Video
Freethink
Subscribe
We focus on solutions: the smartest people, the biggest ideas, and the most ground breaking technology shaping our future.
Subscribe