China’s Mars rover has survived “nine minutes of terror” to successfully touch down on the Red Planet — making China only the second nation to ever land a probe on Mars.

That craft orbited the Red Planet for more than three months before China took the next daring step in the mission: sending the lander and rover down to the surface.

Touch down: On May 14, the lander carrying China’s Mars rover, Zhurong, detached from the orbiter. It then began a fiery plunge through the Martian atmosphere, using a parachute and then rockets to slow its descent.

When it was about 330 feet above Mars, the lander hovered briefly to scan the surface for any potential obstacles before touching down on its four legs.

“Each step had only one chance, and the actions were closely linked,” CNSA official Geng Yan said, according to state-run news agency Xinhua. “If there had been any flaw, the landing would have failed.”

What’s next: China’s Mars rover will stay put in the lander for the next few days, surveying the immediate area while CNSA performs diagnostic tests.

If everything looks good, the car-sized rover will deploy from the lander and spend about three months conducting scientific surveys with its six onboard instruments.

One of those is a device used to measure magnetic forces. China’s Mars rover is the first to feature one of those instruments, and it could help explain the loss of the Red Planet’s magnetic field billions of years ago.

The landing is an important step in our country’s interplanetary exploration journey.

The big picture: Though China’s space program can be traced back to the 1950s, the nation has only started to really emerge as a leader in space exploration in the past few years.

In 2019, China became the first country to land a rover on the far side of the moon, and the following year, it successfully returned samples of moon rocks to the Earth — the first such delivery since the 1970s.

And now Mars: With Tianwen-1, China became the first nation to send a combination orbiter/lander/rover to the Red Planet, and now, it’s the second to pull off a Mars rover landing (after the U.S.).

“(The landing is) an important step in our country’s interplanetary exploration journey, realizing the leap from Earth-moon to the planetary system and leaving the mark of the Chinese on Mars for the first time,” Chinese President Xi Jinping wrote in a letter to the Tianwen-1 team.

We’d love to hear from you! If you have a comment about this article or if you have a tip for a future Freethink story, please email us at [email protected]ethink.com. 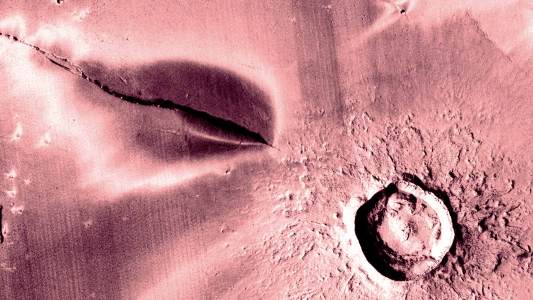 New evidence suggests that volcanoes on Mars may have erupted just 50,000 years ago, far more recently than previously thought.

Astronomy
Volcanoes on Mars might still be active
By Kristin Houser
Subscribe to Freethink for more great stories
Subscription Center
Sections
Video
Freethink
Subscribe
We focus on solutions: the smartest people, the biggest ideas, and the most ground breaking technology shaping our future.
Subscribe