China is just days away from beginning construction on the Chinese Space Station — a project nearly 30 years in the making.

Why it matters: The International Space Station (ISS) is currently the only crewed facility in space, and over the past three decades, it’s hosted astronauts from the U.S., Russia, Japan, and seven other nations.

But none from China — Congress has forbidden the nation’s involvement in the ISS.

The Chinese Space Station will make it possible for Chinese scientists to conduct experiments that have previously been out of their reach — and with the ISS nearing retirement, it could soon be the only crewed space facility (although Russia is also contemplating a space station of its own).

The science: China already has about 100 experiments from Chinese scientists lined up for the space station, Gu Yidong, chief scientist of the China Manned Space Program, told Scientific American.

These range from fundamental research into quantum physics to studies that could lead to better laptop cooling systems.

In addition to its domestic experiments, China has also agreed to host experiments from scientists in Kenya, Mexico and 15 other nations aboard the space station (though none from U.S. scientists).

Constructing a space station: The Chinese Space Station will be about one-sixth the mass of the ISS and consist of three main modules: Tianhe, Wentian, and Mengtian.

Tianhe — the core module — will be large enough to accommodate three astronauts for up to six months at a time. Wentian and Mengtian will be slightly smaller modules for experiments.

China expects to launch the Tianhe module aboard a Long March 5B rocket before the end of April. Ten other launches will follow in 2021 and 2022. Two will carry the other modules, four will deliver cargo, and four will be crewed missions.

China hopes to complete construction on the space station by 2022 and expects the facility to remain operational for at least a decade.

In 2024, it plans to launch the Chinese Space Station Telescope, which will offer about the same resolution as the Hubble Space Telescope but 300-times the field of view.

China hopes to complete construction on the space station by 2022.

The telescope will orbit Earth just a few hundred kilometers away from Chinese Space Station and will be designed to dock with it, making it easy for astronauts on board to service the telescope, if need be. (Infamously, the Hubble required a Space Shuttle mission to fix the initially blurry telescope.)

China’s also collaborating with Russia on a possible lunar space station, which will either orbit the moon or be located directly on it. Construction on that project is expected to begin sometime in the 2020s, with the first crewed missions tentatively aimed for the early 2030s. 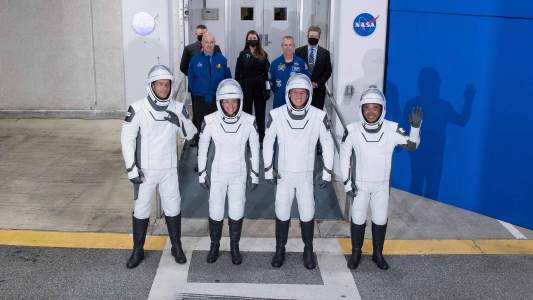 Four astronauts are en route to the International Space Station via a recycled SpaceX rocket and Dragon capsule — a first in spaceflight.