For the past nine years, every NASA astronaut to reach space has hitched a ride there aboard a Russian rocket launched from Kazakhstan.

That’s scheduled to change on May 27, when a SpaceX Crew Dragon capsule, launched from Florida, will ferry two NASA astronauts to the International Space Station (ISS).

The Crew Dragon launch won’t just mark the end of NASA’s reliance on Russia for rides, though. It’ll also mark the beginning of a new era in space exploration — one defined by an unprecedented collaboration between the public and private sectors.

In 2010, NASA invested $50 million in five American aerospace companies, the first step in what would become the Commercial Crew Program.

The idea behind the program was that NASA would make regular investments in private aerospace companies. Those companies could then use the money to develop transportation systems for human space exploration.

It’s Capitalism 101. Why not let them take it over and we buy the service?

The hope was that competition between the companies — and the removal of federal bureaucracy from the process — would spur innovation and lead to lower-cost systems. If any of the companies were successful, NASA could then buy seats aboard the private spacecraft for its own astronauts.

“It’s Capitalism 101,” Lori Garver, former deputy administrator of NASA, told The Verge. “The government is just not good at that stuff. We have been launching for 50 years, and the industry was doing all the work. Why not let them take it over and we buy the service?”

By 2014, Boeing and SpaceX had established themselves as being the leaders of the pack, and NASA awarded each a big contract — up to $4.2 billion for Boeing and $2.6 billion for SpaceX.

For the past six years, the two companies have been working toward the goal SpaceX is set to reach with this week’s Crew Dragon launch: a crewed mission to the ISS.

The launch will take place at NASA’s Kennedy Space Center in Cape Canaveral, from Launch Pad 39A — the same spot where NASA’s Apollo and Space Shuttle missions launched.

If all goes according to plan, a Falcon 9 rocket will lift off at 4:33 p.m. EDT, with the Crew Dragon capsule carrying NASA astronauts Bob Behnken and Doug Hurley atop it.

Less than 10 minutes later, the capsule will separate from the rocket. About 19 hours after that, the Crew Dragon will autonomously dock with the ISS.

Behnken and Hurley will then work with the three astronauts already aboard the space station to open the hatch and officially begin their ISS stay, which will last anywhere from 30 to 119 days.

At that point, the Crew Dragon will begin its return mission to Earth, a two-day undertaking that will end with a splashdown in the Atlantic Ocean.

As with any space mission, a lot could change on the fly — the mission might not even happen until May 30 if the weather doesn’t cooperate.

Still, if all goes well, SpaceX will be cleared to begin regularly transporting NASA astronauts to the ISS from U.S. soil — marking the start of a new era in American spaceflight.

Aerospace
Three crucial experiments aboard NASA’s moon rocket
These Artemis 1 experiments could protect NASA astronauts and help usher in a future in which space is accessible to everyone.
Up Next 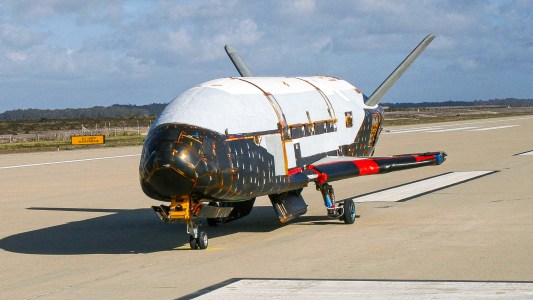 The next time the U.S. Air Force’s X-37B space plane launches, it’ll be carrying an experimental solar panel that could revolutionize clean energy.