On May 30, SpaceX and NASA made history, using a commercial spacecraft — the Crew Dragon — to transport astronauts into space for the first time.

But that remarkable achievement was only the beginning of the Demo-2 mission. Before it could be considered a success, the Crew Dragon needed to safely dock with the International Space Station and then bring the astronauts back home to Earth.

On May 31, the mission nailed that second goal, with the Crew Dragon docking with the ISS at 10:16 a.m. EDT so that astronauts Robert “Bob” Behnken and Douglas “Doug” Hurley could join the three astronauts already onboard.

“It flew just like it was supposed to,” Hurley said of the 19-hour Crew Dragon journey. “It’s exactly like the simulator, and we couldn’t be happier about the performance of the vehicle.”

Behnken and Hurley will remain onboard the ISS for anywhere from one to four months before attempting the final milestone in the Demo-2 mission: the safe return to Earth.

Until then, check out the videos and photos of SpaceX’s Crew Dragon docking below. 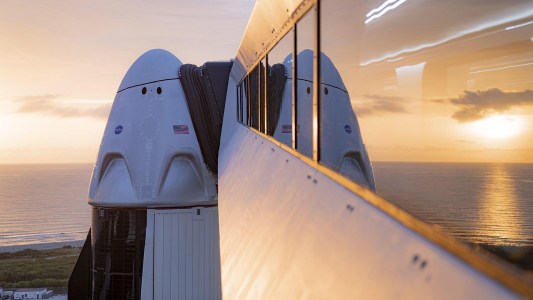 SpaceX’s Crew Dragon had a successful liftoff from Cape Canaveral on May 30, marking the beginning of the historic Demo-2 mission.