With today’s Crew Dragon liftoff, NASA astronauts have officially launched from U.S. soil for the first time since 2011.

A SpaceX Falcon 9 rocket with a Crew Dragon capsule affixed to it launched from Cape Canaveral’s Launch Complex 39A at 3:22 p.m. EDT, kicking off the Demo-2 mission. The launch was originally scheduled for May 27, but was postponed due to unfavorable weather conditions.

NASA astronauts Robert “Bob” Behnken and Douglas “Doug” Hurley are currently aboard the spacecraft, which is expected to dock with the International Space Station at approximately 10:29 a.m. EDT tomorrow, May 31.

With the Crew Dragon liftoff, SpaceX became the first private company to send astronauts into space. If all goes well with this mission, the company will be cleared to ferry NASA astronauts to and from the ISS — marking the culmination of the decade-long Commercial Crew Program.

You can see photos and video of the Crew Dragon liftoff below — be sure to return to Freethink for updates on the Demo-2 mission’s docking with the ISS and return to Earth. 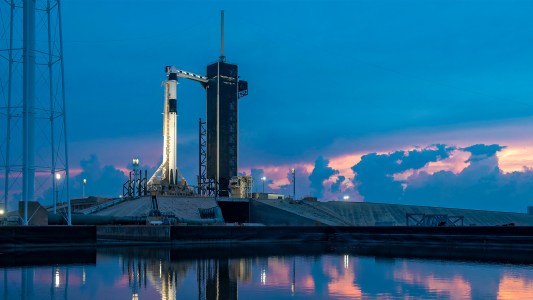 What you need to know about the SpaceX launch happening on May 27, a historic event that will mark a turning point in human space exploration.

Aerospace
What to know for today’s SpaceX launch (updated)
Subscribe to Freethink for more great stories
Subscription Center
Sections
Video
Freethink
Subscribe
We focus on solutions: the smartest people, the biggest ideas, and the most ground breaking technology shaping our future.
Subscribe