Updated, 5/27/20, 4:20 EDT: Due to unfavorable weather, NASA and SpaceX scrubbed today’s scheduled Crew Dragon launch. They will attempt the launch again on Saturday, May 30, at 3:22 p.m. EDT. If that launch happens, Crew Dragon will then dock with the ISS on May 31 approximately 19 hours after launch.

In addition to developing, launching, and landing the first reusable rocket — an industry-changing achievement that is already dramatically cutting the cost of space travel — it’s also secured a number of firsts for a private aerospace company, including being the first to dock with the International Space Station (ISS).

At approximately 4:30 EDT today, May 27, SpaceX is going to attempt something that will mark another major turning point in space travel — sending humans into space by way of a private company.

So, What’s the Mission?

This mission is called Demo-2, and it’s the second demonstration of the Crew Dragon, a spacecraft SpaceX developed to ferry NASA astronauts to and from the ISS.

Why Is This a Big Deal?

During the first demonstration of Crew Dragon, the spacecraft wasn’t crewed — during this SpaceX launch, two NASA astronauts will be on board.

Not only will this be the first time since 2011 that astronauts launch into space from U.S. soil, it’ll also mark the first time ever that a private space company has sent humans into space.

NASA astronauts Robert “Bob” Behnken and Douglas “Doug” Hurley will serve as the crew for this historic SpaceX launch. They’ve both spent time aboard the ISS previously and have extensive spaceflight experience.

Weather permitting, a Falcon 9 rocket with the Crew Dragon capsule attached will lift off from Launch Complex 39A at Florida’s Cape Canaveral at 4:33 p.m. EDT on May 27.

On Thursday, May 28, at approximately 11:30 a.m. EDT, Crew Dragon will dock with the ISS, and Behnken and Hurley will join the three astronauts already on board.

Neither NASA nor SpaceX have revealed when the Crew Dragon will return to Earth — it could be anywhere from 30 to 119 days after docking.

When the Crew Dragon is ready to head home, it will autonomously undock from the ISS and re-enter Earth’s atmosphere.

Approximately two days after undocking, the spacecraft will use parachutes to gently splashdown in the Atlantic Ocean off the coast of Florida, where SpaceX will recover it.

When/How Can I Watch?

You can start watching NASA’s live countdown coverage for the SpaceX launch at 12:15 p.m. EDT on YouTube or via the video embedded below. It will be followed at 7:30 p.m EDT by a post-launch news conference featuring NASA Administrator Jim Bridenstine.

If all goes well with the Demo-2 mission, SpaceX will be cleared to begin transporting astronauts to the ISS for NASA — a goal both groups have been pursuing ever since SpaceX joined the Commercial Crew Program in 2011.

NASA has already contracted SpaceX for six crewed flights to the ISS. For the first, Crew-1, the company will transport four astronauts — NASA’s Michael Hopkins, Victor Glover, and Shannon Walker and Japan’s Soichi Noguchi — to the space station for a six-month stay, and that mission could happen before the end of 2020. 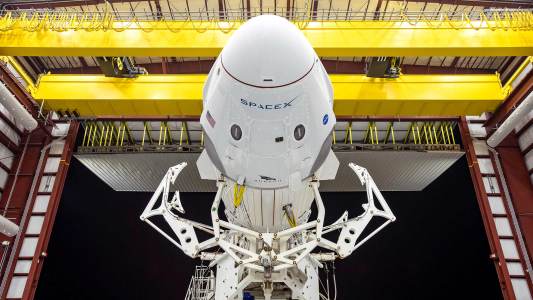 On May 27, a SpaceX Crew Dragon will ferry two NASA astronauts to the International Space Station as part of the Commercial Crew Program.

Aerospace
“Crew Dragon” launch to kick off new era in US spaceflight
Subscribe to Freethink for more great stories
Subscription Center
Challenges
Video
Freethink
Subscribe
We focus on solutions: the smartest people, the biggest ideas, and the most ground breaking technology shaping our future.
Subscribe