A group of security researchers have hacked a decommissioned communications satellite, called Anik F1R, originally shot into orbit in 2005.

Embedded device security researcher Karl Koscher and his colleagues demonstrated that malicious hackers could potentially communicate with satellites that have been decommissioned but not yet moved into their final resting place — their “graveyard orbit.”

With permission, the researchers were able to access the satellite and broadcast a signal across the northern hemisphere, WIRED’s Lily Hay Newman reported.

“My favorite thing was actually seeing it work!” Koscher told Newman.  “It’s kind of unreal to go from making a video stream to having it broadcast across all of North America.”

A group of security researchers have hacked a decommissioned communications satellite, broadcasting a signal across North America.

Satellite hacking: Koscher has gone satellite hacking before — he was a member of ADDVulcan, a team that participated in DEF CON’s “Hack-a-Sat” challenge in 2020.

The US Air Force-backed capture the flag contest tasked teams with regaining control of a satellite captured by the enemy; the final challenge was to beam directions to a real satellite in orbit, ordering it to take a photo of the moon (a literal moonshot).

Both Hack-a-Sat and Koscher’s recent satellite hacking are revealing of vulnerabilities floating in orbit around us.

While Koscher and company had permission to access the satellite and access to its commercial uplink facility, the demonstration shows that satellites that have ceased to be used but are still reachable could be rich targets for satellite hacking — if you have the means to talk to them.

“Technically, there are no controls on this satellite or most satellites—if you can generate a strong enough signal to make it there, the satellite will send it back down to the Earth,” Koscher told Newman.

“People would need a big dish and a powerful amplifier and knowledge of what they were doing. And if a satellite were fully utilized, they would need to overpower whoever else was using that particular transponder spot or frequency.”

Or, as Newman put it, whoever yells loudest into the space microphone gets to be heard.

Bad actor broadcasts: Hackers have already taken advantage of under-the-radar, underutilized satellites, Newman reports. In 2009, the Brazilian Federal Police arrested 39 people for allegedly satellite hacking former US Navy satellites to use for their own CB communications.

And the lack of security measures on most satellites means that governments could turn to satellite hacking.

“One implication is that states who want to broadcast propaganda could do it without launching their own satellite, they could use another satellite if they have the ground equipment,” he told Newman. 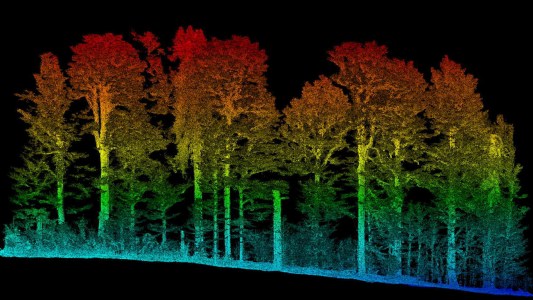 A lidar instrument on the ISS has been used to create a near-global 3D map of the Earth’s biomass for conservation and climate research.