NASA has shared two photos of Jupiter’s moon Ganymede that were taken by the Juno probe when it was fewer than 700 miles from the moon’s icy surface.

Extended mission: Juno has been orbiting Jupiter since 2016, and the initial plan was for the probe’s mission to wrap up in July 2021. However, NASA announced plans to extend the mission in January, adding flybys of three of the planet’s 79 moons, including Ganymede, to the itinerary.

“Since its first orbit in 2016, Juno has delivered one revelation after another about the inner workings of this massive gas giant,” Scott Bolton, the Juno mission’s principal investigator, said at the time.

“With the extended mission, we will answer fundamental questions that arose during Juno’s prime mission while reaching beyond the planet to explore Jupiter’s ring system and Galilean satellites.”

The visit: On June 7, Juno completed the first of its two planned flybys of Ganymede, soaring within just 645 miles of the moon’s icy surface — closer than any probe in the past 20 years.

NASA is still downloading data from the flyby, but on June 8, it shared two photos from it: one snapped by a color camera on Juno (the JunoCam) and the other by a black-and-white camera (the Stellar Reference Unit, or SRU).

The JunoCam photo depicts almost an entire side of the moon, which is the largest in our entire solar system. NASA is still awaiting identical shots, taken with different color filters — once it receives those, it’ll be able to piece together a color portrait of Ganymede.

The SRU image, meanwhile, is a higher-resolution shot focused on Ganymede’s dark side.

“The conditions in which we collected the dark side image of Ganymede were ideal for a low-light camera like our Stellar Reference Unit,” Heidi Becker, Juno’s radiation monitoring lead at JPL, said in a press release.

The next steps: Specific features in the images of Ganymede are already piquing scientists’ interest — they suspect long, thin structural features in the pictures might be signs of tectonic faults — but for now, they’re just enjoying the photos like the rest of us.

“We are going to take our time before we draw any scientific conclusions, but until then we can simply marvel at this celestial wonder,” Bolton said. 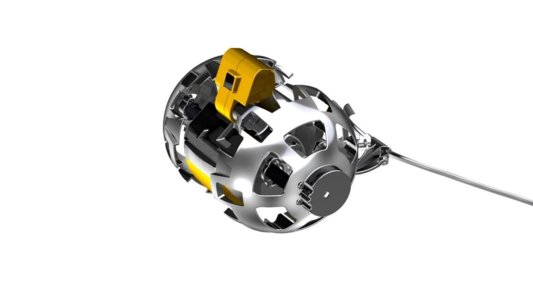 Japan is sending a transforming moon rover to the lunar surface in 2022 to collect data that will inform an upcoming crewed mission.