The Japan Aerospace Exploration Agency (JAXA) is sending a transforming moon rover to the lunar surface to collect data that will inform an upcoming crewed mission.

The challenge: JAXA is currently working with Toyota to develop the Lunar Cruiser, a crewed rover it plans to send to the moon in 2029.

To ensure the Cruiser can safely ferry astronauts around the moon, JAXA needs to know more about the lunar surface — and that’s where this tiny new rover comes into play.

The transforming moon rover: JAXA has partnered with Sony, Doshisha University, and toy manufacturer TOMY Company to develop a new rover to explore the lunar surface in anticipation of the crewed mission.

Based on the current design, the rover will be sphere-shaped and slightly larger and heavier than a baseball. Once it reaches the moon’s surface, the bot’s exterior shell will split into two hemispheres and expand, giving it a more oblong appearance.

JAXA calls that the robot’s “running form,” where the transforming moon rover will be able to roll around the moon, taking photos and collecting data on the dust that covers its surface.

The mission deets: JAXA plans to land its transforming moon rover on the lunar surface in 2022. It will hitch a ride there via a SpaceX Falcon 9 rocket, nestled in an HAKUTO-R lunar lander (designed by ispace Inc., a private Japanese space company).

Any data the rover collects will be bounced back to Earth via that lander.

The big picture: If the mission is a success, Japan will become just the fourth nation to soft-land a craft on the moon — though it may have to share the distinction with the United Arab Emirates, which also plans to send a rover aboard the same ispace lander.

Looking further ahead, if Japan’s crewed mission planned for 2029 is a success, it’ll be just the second nation to land people on the moon — assuming China, Russia, or one of the other countries with eyes on the moon doesn’t beat it there. 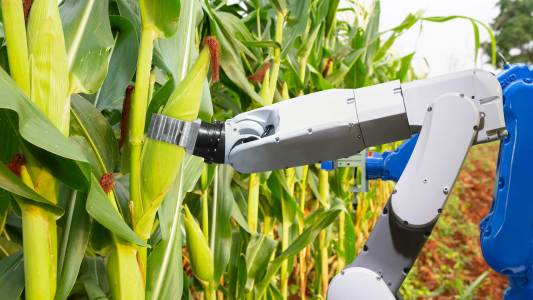 At a smart farm in Australia, robots and AI will do all the manual labor, potentially foreshadowing agriculture’s “hands-free” future.