The Earth is circled by a sea of space junk, and it poses a danger to satellites and astronauts. We know we should clean this up, but there’s a problem: it’s tough to get a grip on things in space.

Lack of gravity makes it difficult to grab and hold items. But a team of Stanford engineers have come up with a solution: a “gecko gripper” robot arm, which is sticky like the pads on a gecko’s foot.

How it works: The gecko adhesive does not require much to stick to a surface.

“The texture of it is too fine to see, but if you were to look at it under a microscope, you would see a forest of little tiny, sharp wedges,” Stanford mechanical engineering professor Mark Cutkosky said in a statement. His lab co-developed the gripper with a professor of aeronautics and astronautics, Marco Pavone.

“Like the actual gecko itself, most of the time it’s not sticky. But when you pull in just the right direction it grabs and it grabs pretty hard. So that gives us a controllable adhesive.”

Testing the gecko gripper in space: The gripper traveled up to the International Space Station (ISS) in 2019. Finally, this April, it was put to the test.

The astronauts unpacked the gripper and placed it on one of the station’s free-flying Astrobee robots, named “Honey,” to evaluate how the gecko gripper functions in microgravity.

Guest scientists can use the Astrobee’s laboratory, run by NASA’s Ames Research Center in California’s Silicon Valley, to conduct zero-gravity robotics research within the ISS.

With a live video feed, they were able to guide the astronauts through a series of tests, including inspecting and attaching the gripper and measuring the force of its hold.

The tests were overall successful — the Astrobee even used the gecko arm to perch on a wall inside the ISS.

In the future: NASA plans to have the robot onboard the ISS to perform tasks, like retrieving items or taking inventory.

“We think gecko-inspired adhesives are a technology that can assist and augment the capabilities of astronauts, whether it be being able to pick up tools or record live astronaut activities,” said Cauligi. “The idea is to really be able to automate a lot of the activities that are done on board.”

Pavone says this breakthrough is just the first step in a three-phase strategy to demonstrate the value of gecko-inspired adhesives, with the ultimate objective of cleaning up space junk. 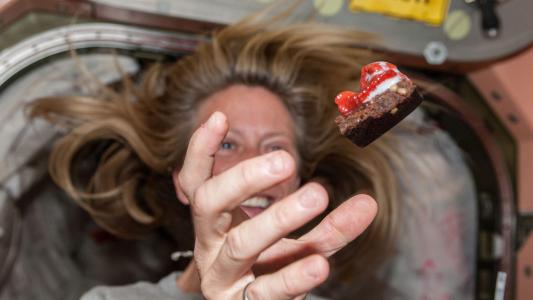