The fabric of space and time is anything but static. Ripples of cosmic events pass through us – from the dance between two colliding black holes to exploding stars.

These events cause gravitational waves, which stretch and compress space itself. But detecting these waves is no easy task. Now, a recent paper published in Physical Review Letters explains how we can use the orbit of the Moon to find gravitational waves we can’t currently detect in other ways.

It’s serious business when two massive objects, like black holes, merge. As they circle one another, their orbits close in as the objects spin faster and faster. Waves within the fabric of the universe ripple outwards, stretching and compressing spacetime itself.

Of course, this is not something you would recognize in your day-to-day life. Scientists have to make use of giant interferometers to measure this stretching and compressing.

Gravitational waves stretch and compress space itself — but detecting them is no easy task.

One of these is LIGO (the Laser Interferometer Gravitational-Wave Observatory), with two detectors (in Washington and Louisiana). These detectors look like giant “L’s”, with two 4 km long arms stretching out at right angles. LIGO is so sensitive that it can measure a stretching or compressing of space that is just one-ten thousandth the width of a single proton.

Another detector, LISA (the Laser Interferometer Space Antenna) is scheduled to launch in 2030. This detector will use three spacecraft millions of miles apart, again in the shape of an “L”. In both of these detectors, a laser is sent down both legs of the L. After reflecting at the far end of the leg, both beams return and interfere with one another.

How these waves interfere will reveal if a gravitational wave stretched or compressed one leg of the L as it passed by.

Another way to find gravitational waves is to use what nature gave us — pulsar timing arrays. Pulsars are spinning neutron stars that emit beams of light. As they spin, these beams occasionally point at Earth – sort of like a lighthouse. This rotation is both very fast (on the order of a fraction of a second) and very reliable (they are often referred to as the atomic clocks of the universe).

By using sets of pulsars, we can essentially build an interferometer with arms that span the Galaxy.

However, human-constructed arrays and pulsars are not sensitive to all frequencies of gravitational waves. Some waves may originate from the early universe, a result of massive phase changes or cosmic strings.

But gravitational waves from these sources could be detected by using an unlikely and nearby source: the Moon.

When Apollo astronauts landed on the Moon, they left small mirrors on the lunar regolith. Shining a powerful laser at these mirrors from Earth allows us to measure the distance to the Moon within a few millimeters.

Recently, Dr. Diego Blas of the Universitat Autònoma de Barcelona and Dr. Alexander Jenkins of University College London proposed to use this precise knowledge of the distance to look for passing gravitational waves.

When using human-constructed pulsar timing arrays on Earth, there is a huge range of gravitational wave frequencies that we are missing out on – from 0.1 microhertz to 0.1 millihertz.

Measuring the distance between the Earth and the Moon could find the combined effect of many gravitational waves coming in from all directions.

“If the frequency of the gravitational wave is such that the Moon is always pushed or pulled in the same direction every time it’s at the same point in its orbit, then you get a resonance phenomenon which can have a lasting impact on the orbit,” Jenkins told Freethink.

“This is completely analogous to pushing a child on a swing — if you time your pushes just right, and always push when the swing is at its highest point, then the child can end up going quite high!”

Because of this, the precise distance to the Moon would be sensitive to certain frequencies that are the orbital period of the Moon divided by a whole number. Frequencies like this would be sure to always push or pull the Moon in the same direction, resulting in a resonance effect — like pushing a child on a swing.

For example, looking at the orbital period of the Moon over the course of fifteen years might result in a change in the Moon’s distance to the Earth of 0.1 mm. That’s tiny – but lunar ranging could detect it.

“We know that our system is exposed to a constant background ‘hum’ of gravitational waves from many different sources throughout the universe — much like how we’re constantly bathed in electromagnetic waves coming from all directions from the many stars that fill the night sky,” Jenkins says. “We call this ‘hum’ the stochastic gravitational-wave background.”

And this background can tell us about the physics of the early universe.

One of these sources is cosmological “phase transitions.” We see phase transitions all the time in everyday life, like when you put on a pot of water to boil. As the water gets hotter, it first forms tiny bubbles, which grow and grow, as the liquid converts to a gas.

Cosmological phase transitions can be thought of in the same way.

“You can have quantum fields in the first moments after the Big Bang which undergo an analogous process: they nucleate bubbles of a new, energetically favorable phase, and these bubbles expand and collide with each other,” Jenkins told Freethink.

“These collisions, and the resulting motion of the other matter in the universe at that time, generate a lot of gravitational waves.”

“The methods we’re proposing don’t require new, untested technologies, or huge amounts of time or money to bring to fruition.”

The best part: we can use this “detector” right away.

“We think this is one of the most exciting features of our work,” Jenkins says. “The methods we’re proposing don’t require new, untested technologies, or huge amounts of time or money to bring to fruition. The data we’re talking about is already being gathered, and is already used for all kinds of interesting science, completely unrelated to gravitational waves.” 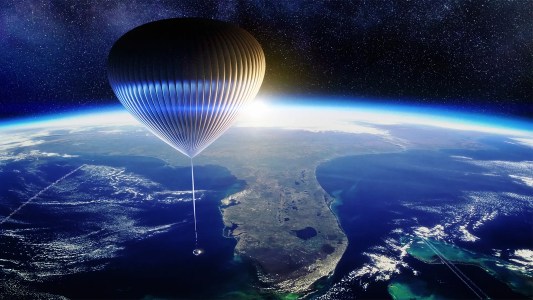 Space Perspective plans to use a massive space balloon to lift a luxury cabin containing space tourists high above the Earth.

Aerospace
Inside the luxury cabins taking tourists to space with a balloon
By Kristin Houser
Subscribe to Freethink for more great stories
Subscription Center
Sections
Video
Freethink
Subscribe
We focus on solutions: the smartest people, the biggest ideas, and the most ground breaking technology shaping our future.
Subscribe