Startup Space Perspective has released the first illustrations of the luxury cabin in which it plans to carry tourists high above the Earth, under the gentle power of a massive space balloon.

It has already received deposits for hundreds of tickets to the edge of space, and the company anticipates its first launches will begin in 2024.

Space tourism: Governments and militaries have long been the only groups that could afford to send people to space. But recently, reusable rockets and other innovations have slashed launch costs, ushering in the new era of space tourism.

Billionaire Jeff Bezos’ space company Blue Origin has sent several groups of tourists to space in a rocket, including Star Trek’s William Shatner, and while billionaire Richard Branson’s Virgin Galactic has yet to carry any paying customers up in its spaceplane, its crew has completed two spaceflights.

Next-level balloon rides: Space Perspective hopes to be one of the next companies to jump into the space tourism industry by using a massive space balloon to lift a pressurized cabin, called Neptune, to an altitude of about 100,000 feet.

That’s not technically space — the Kármán line separating Earth’s atmosphere from space is about 330,000 feet up — but it is high enough that passengers inside the capsule will be able to enjoy the view of Earth’s horizon and the darkness of space.

“Neptune’s ascent peaks above 99% of the Earth’s atmosphere at the edge of space,” according to Space Perspective. “You’ll have two hours to view the curve of the Earth, the total blackness of space, and the thin blue line of our atmosphere.”

Passengers won’t experience weightlessness during the flight, because the steady movement of the balloon means it is never in free fall.

After about two hours at its peak altitude, the space balloon will slowly descend, landing in the ocean approximately six hours after lifting off.

What’s new? In June 2021, Space Perspective completed its first test flight, using a space balloon to carry a full-sized (though not full-weight) capsule to 108,000 feet above Earth. It has now shared illustrations of the interior of its future passenger capsule, which it calls the “Space Lounge.”

The lounge includes WiFi, reclining seats, customizable lighting, and 360-degree views (even the restroom has large windows). There’s plenty of room to walk around, take photos, and even eat a meal — Space Perspective says dining and beverage service will be available onboard.

The bottom line: At $125,000 per ticket, Space Perspective isn’t offering a cheap space experience. But a Virgin Galactic ticket costs $450,000 (and Blue Origin won’t share its ticket costs), so it is cheaper, thanks to the lack of rockets and fuel — potentially making a visit high above Earth affordable to more people.

Space Perspective says it has taken deposits for 600 tickets so far and expects to begin commercial flights in late 2024. It’s now taking reservations for 2025 flights, which are available with a $1,000 refundable deposit.

A single test flight and plans for a swanky cabin won’t be enough to actually put tourists in space, though — the startup will need to conduct more tests carrying full-weight prototypes of its capsule before any paying passengers board its space balloon. 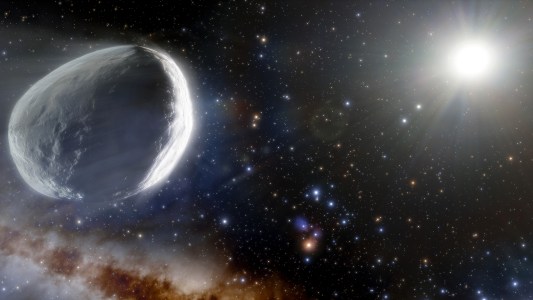 Comet Bernardinelli-Bernstein is the largest comet ever observed, according to a new study based on Hubble Space Telescope data.